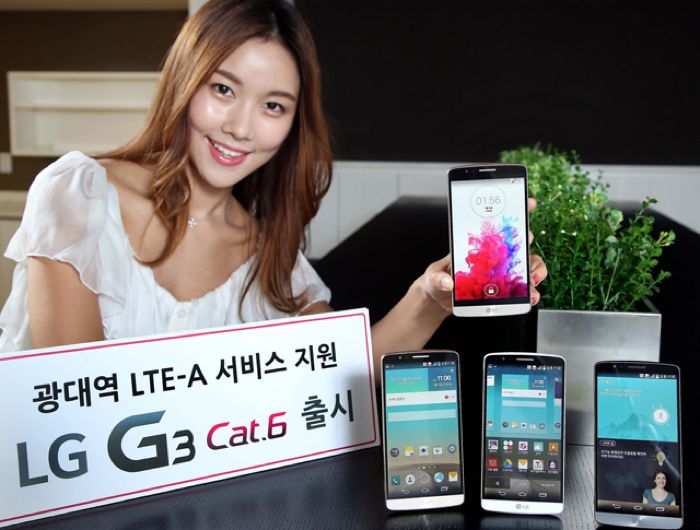 We recently heard a rumor that the new LG G3 Prime would launch in South Korea on the 25th of July, the handset is now official, and as we previously reported it is called the LG G3 Cat. 6.

The LG G3 Cat. 6 comes with some impressive specifications, these are the same specifications we have been hearing about for the LG G3 Prime for some time.

The LG G3 Cat.6 comes with the same 5.5 inch QHD display as the G3, the handset features a resolution of 2560 x 1440 pixels, and processing is provided by a quad core Qualcomm Snapdragon 805 processor with a clock speed of 2.7GHz.

This new high end version of the LG G3 is also equipped with 3GB of RAM and 32GB of built in storage, the device also comes with LTE-A, this offers impressive download speeds of up to 225Mbps.

Other specifications on the new LG G3 Cat.6 include a microSD card slot, WiFi, Bluetooth 4.0, GPS, and NFC, the handset also features a 3000 mAh battery and Android 4.4 KitKat.

The new LG G3 Cat.6 will be exclusive to South Korea, the company has not announced any plans to launch the handset outside of South Korea.

As we heard previously, we are expecting the LG G3 Cat. 6 to be launched internationally as the LG G3 Prime, and there have been rumors of a release date of September, so we wouldn’t be surprised if the device was announced at IFA 2014 in September.