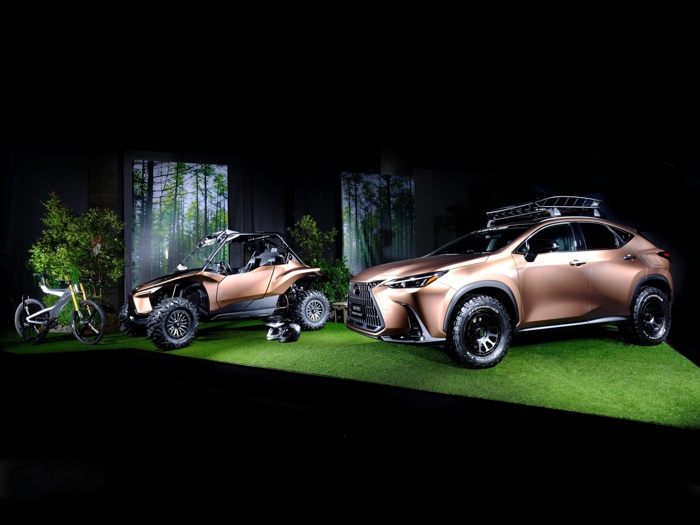 The Lexus NX PHEV OFFROAD is based on the Lexus NX 450h+ plugin electric hybrid that launched around the end of last year.

The NX PHEV OFFROAD is based on Lexus’s first plug-in hybrid electric model, the NX 450h+, which went on sale at the end of last year, a car that delivers both refined performance and lower CO2 emissions. The bodywork design inspires adventure, with its lifted platform, large diameter all-terrain tyres and customised bronze and matt black paint finish.

The Lexus ROV (recreational off-road vehicle) goes beyond traditional on and off-road driving capabilities with a compact body that brings you closer to nature in a driving experience unlike any conventional passenger vehicle. It is the first Lexus to use a hydrogen-powered engine, giving it excellent environmental credentials as well as the pleasure generated by the sound and feel of an engine.

Compressed hydrogen fuel is stored in a high-pressure tank and introduced into the engine using precise direct injection. The result is an environmentally efficient engine that produces high-response torque from the hydrogen’s rapid combustion. It also maintains the stimulating feel of an engine-powered vehicle. With engine oil consumption kept to a minimum, there are virtually no CO2 emissions when driving.

You can find out more details about the new Lexus NX PHEV OFFROAD and Hydrogen ROV Concepts over at Lexus at the link below.