Specifications of a new Lenovo ThinkPad tablet powered by Google’s tablet Honeycomb OS have surfaced from a leaked document. According to the leaked company presentation, Lenovo’s planning to release its Android 3.0 tablet this July.

The new Lenovo ThinkPad tablet specifications include a 10.1 inch IPS display with a resolution of 1280 x 800 powered by a Tegra 2 processor, with up to 64GB of storage. Connectivity will be provided by 3G and 4G connectivity options. The presentation also shows a keyboard docking device that looks as though it will transform the tablet in a notebook when docked. 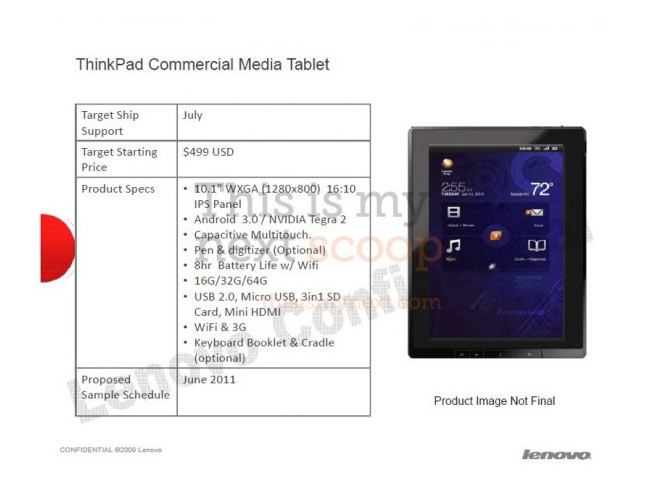 Other specifications include : front and rear cameras, a full-size USB 2.0 port, mini-HDMI out, and an SD card reader presumably for expanding the onboard storage. The battery is also mentioned and will have an 8 hr useful life within the Lenovo ThinkPad Honeycomb Tablet.

Unfortunately no information on pricing or worldwide availability has been leaked within the presentation, but as soon as it becomes available we will let you know. Take a look and our article on Android vs iPhone to see which smartphone and mobile platform is best for you.

Source : This Is My Next