Check out this fun robot which was made by Ken Lim, it is designed to monitor your Twitter feed and then react to it, the Guardian Robot. The Guardian Robot is designed to encourage you to interact with posts it find on Twitter, and it monitors Twitter for happy or sad updated from your friends. Using a little Arduino programming and cardboard engineering easy to build robot is a great project for students looking to learn more about programming and learning more about the Arduino ecosystem. For more details jump over to the official Arduino website where the new IDE is available to help program your projects with ease both online and off-line on your local computer.

“Arduino is an open-source electronics platform based on easy-to-use hardware and software. Arduino boards are able to read inputs – light on a sensor, a finger on a button, or a Twitter message – and turn it into an output – activating a motor, turning on an LED, publishing something online. You can tell your board what to do by sending a set of instructions to the microcontroller on the board. To do so you use the Arduino programming language (based on Wiring), and the Arduino Software (IDE), based on Processing.” 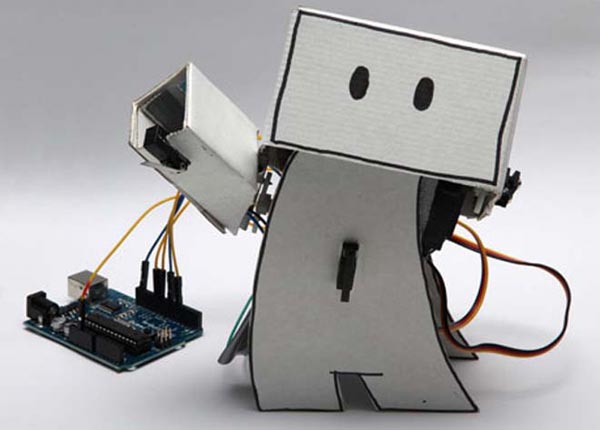 The Guardian Robot can even send a Retweet on your behalf from its own Twitter address @guardianrobot.

It was made using two servos, two microswitches, and a few other parts and it cost Ken around $70 to make, check out the video of it in action below.

The Guardian via Gadget Lab