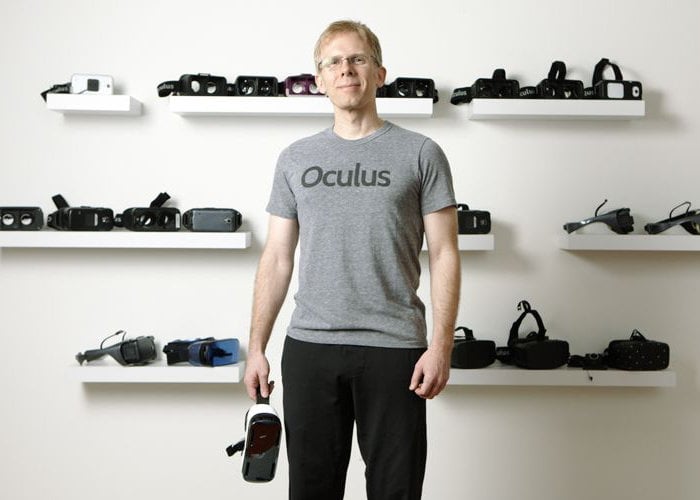 John Carmack computer programmer and games developer responsible for classics such as DOOM, Wolfenstein and a co-founder of id Software and currently the CTO of Oculus VR at Facebook. Has been awarded a VR Lifetime Achievement at the recent third annual VR Awards ceremony. Although Carmack thinks the award may be a little premature and has more to give the development of virtual reality platform. Watch the video below to see Carmack’s acceptance speech or read the transcript underneath.

“So when I heard that I was up for a lifetime achievement award for VR, I actually thought it might be premature.

I’m often kind of grumpy around the office because I really haven’t been satisfied with the pace of progress we’ve been making. When I’m in VR, I see the magic there but my brain is always throwing up these giant to-do post it notes on top of everything, just reminding me of all the work that is yet to be done.

So, it’s going to be a little while before I really feel good about reminiscing about my achievements, but still… While I had my brushes with sort of the paleo VR back in the 90s, I do like to date the modern era of VR to when I was putting duct tape and hot glue on Palmer Luckey’s prototype Rift for E3 of 2012.

And after that, I was really well suited to the system’s engineering tasks involved in bringing VR to the more constrained mobile chipsets and systems. But all that technology really doesn’t mean much until its brought in service of user value.

So more than anything, I hope that I’ve been helpful in bringing this new canvas for people to work on and that the work that those people do will be paving the way in the future.

So, thank you very much.”