A Dutch company named ixxi has come up with a novel solution for mounting large flat prints on large flat walls. It’s called ixxi, a styling moniker that best captures the sensible tools necessary for the job at hand. The job being to mount large prints on large surfaces. For the record, ‘ixxi’ stands for the x and I connectors that are used to frame the print, which comes printed in roughly A4 sized cards. 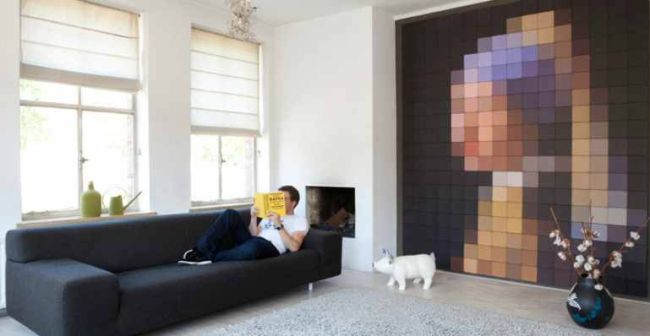 That’s the whole and sum total genius of ixxi, as it allows DIY home designers to pimp their pads with stylish extra large images. Seen above is a good albeit rather awfully rendered example. We’re referring to the pixelated Girl With A Pearl Earring, which looks much grander in its original form. Some of the best portrayals of 17th century naval action are actually from the hands of Dutch painters.

Anyway, once the x and i connectors of ixxi are laid out on a vertical surface, the customer then has a photo or image of their choice printed into separate cards that are assembled on the connector frame. Sounds real easy to do and fun. Costs for this, however, vary according to the sizes involved.