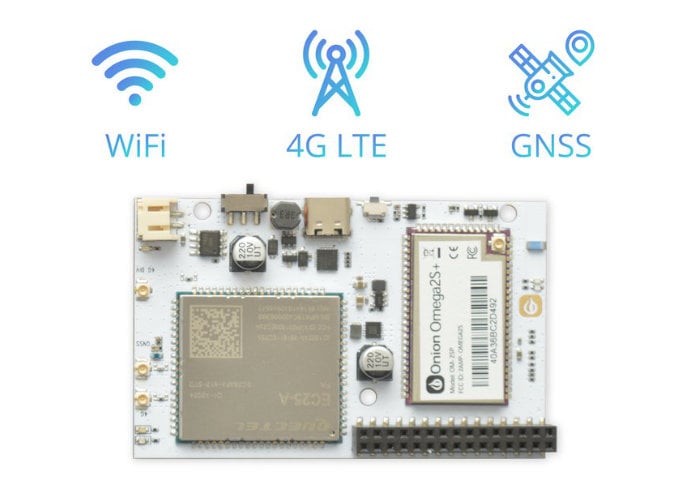 Developers, hobbyists and makers building Internet of Things projects may be interested in a new 4G LTE and Wi-Fi connected Linux dev board with GNSS global positioning called the Onion Omega2 LTE. The developing board has a form factor smaller than a credit card and features an LTE Cat 4 modem that delivers 150 Mbps downlink and 50 Mbps uplink data rates.

The Omega2 LTE is an all-inclusive, standalone computing device for developing cellular IoT applications, simply add a Nano-SIM card with a data plan, LTE antennas, and power it all up via USB or battery. Watch the demonstration video below to learn more about the IoT board which is now available to back via the Crowd Supply website from $99 with worldwide shipping expected to take place during early August 2019.T

“The Linux network stack makes the switch between Wi-Fi and cellular data seamless to user applications. Take your existing NodeJS or Python IoT project outside the building with minimal effort! Or, use it as a fully-customizable cellular gateway for other Wi-Fi devices, deployed remotely or on the go.”

“Effortlessly deploy your IoT applications in remote areas without being limited by the range of Wi-Fi networks. The Omega2 LTE is the latest addition to the Omega2 family of Linux IoT computers, adding built-in high-speed 4G LTE cellular data connectivity and GNSS global positioning.” The Omega2 LTE supports all of the common positioning systems:

For more details and full specifications jump over to the official Crowd Supply project page by following the link below.