It looks like HTC has another Android smartphone in the works, as the guys from Brief Mobile have obtained some specifications on a yet to be announced Android device from HTC, the HTC Ville C.

The HTC Ville C will come with a 4.3 inch qHD touchscreen AMOLED display with a resolution of 540 x 960 pixels, processing will be provided by a dual core 1.7GHz processor. 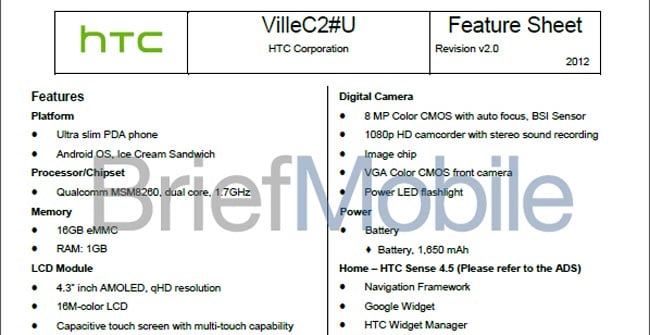 Other specifications on the HTC Ville C include Android 4.0ICS, plus an 8 megapixel camera with a BSI sensor and auto focus, capable of recording full HD video in 1080p.

The HTC Ville C will also come with a front facing VGA camera for video chat and a 1,650 mAh battery, plus HTC Sense 4.5, as soon as we get some actula photos of this new HTC android device we will let you guys know.