Some of our readers will remember the HTC Aria Android smartphone that was leaked a couple of weeks ago. The HTC Aria has now been officially announced and it is coming to US mobile operator AT&T.

The HTC Aria will come with Android 2.1 and features a 3.2 inch HVGA display, plus a five megapixel camera with autofocus and an LED flash, a proximity and light sensor, a digital compass, G-sensor and GPS/AGPS. 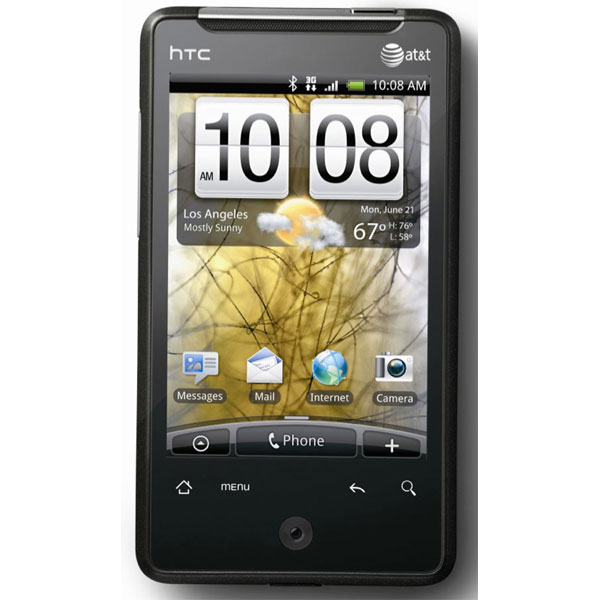 Other specifications include 802.11 b/g WiFi, a micro USB connectore, HSDPA, EDGE and GPRS support, plus 512MN of flash storage and 256MB of RAM.

The HTC Aria also features a microSD card slot, and it will come with a 2GB microSD card with the option to upgrade to a 32GB card.

HTC Aria features the acclaimed HTC Sense experience, which automatically delivers the most-wanted information by bringing it to the forefront of the mobile experience.  Featuring the latest version of HTC Sense, HTC Aria offers even more ways to stay connected, including Friend Stream, which delivers Facebook, Twitter and Flickr updates in a single, consolidated view.

The HTC Aria will  be available from the 20th of June 2010 for $129.99 after rebates on a two year AT&T contract. Have a look and our article on Android vs iPhone to see which smartphone and mobile platform is best for you.

HTC Aria is Wi-Fi capable and qualifying customers will receive access to AT&T Wi-Fi, with more than 20,000 hotspots across the U.S.  In addition, HTC Aria is compatible with AT&T’s High Speed Packet Access (HSPA) 7.2 Mbps technology.  This technology provides a considerable boost to 3G speeds when combined with expanded backhaul. The combination of faster wireless networks, smartphones like HTC Aria, and tens of thousands of available innovative mobile apps allows AT&T customers to mobilize virtually everything, from video and music, to social networking, to business applications.

“HTC Aria is the first of several smartphones in our Android portfolio to run the 2.1 platform,” said Jeff Bradley, senior vice president, Devices, AT&T Mobility and Consumer Markets. “When you combine the nation’s fastest 3G network, and access to the nation’s largest Wi-Fi network, HTC Aria will be one of the best Android smartphones available.”

HTC Aria features the acclaimed HTC Sense experience, which automatically delivers the most-wanted information by bringing it to the forefront of the mobile experience.  Featuring the latest version of HTC Sense, HTC Aria offers even more ways to stay connected, including Friend Stream, which delivers Facebook, Twitter and Flickr updates in a single, consolidated view.

“Its unique combination of compact size and beautiful design instantly separates HTC Aria from the pack of ‘me-too’ smartphones,” said Jason Mackenzie, vice president of HTC America. “But what really differentiates HTC Aria from other smartphones is the acclaimed HTC Sense experience, which we are pleased to be bringing to AT&T customers. By putting people at the center of everything it does, HTC Aria organizes all of your communications in the most human way possible – by person.”

A full selection of the newest and most popular Google services can be accessed with HTC Aria. This includes Google search, Google Maps, Google Navigation, Gmail, YouTube and more. With Android Market, customers can also choose from more than 50,000 applications to further personalize the mobile experience.

Along with being ultra-small at just over 4 inches long and weighing a mere 4.05 ounces, HTC Aria’s seamless wrap-around soft-touch back cover eliminates sharp edges, making HTC Aria exceptionally convenient to carry and comfortable to hold as well.

Featuring the best selection of smartphones and OS, AT&T is ranked #1 in customer satisfaction among smartphone owners.  AT&T plans to expand its Android portfolio to include other Android smartphones during the second half of 2010.

HTC Aria will be available on June 20 at AT&T retail locations nationwide or at http://www.att.com/wireless for $129.99 after $100 mail-in rebate (pay $229.99 and after mail-in rebate receive $100 AT&T Promotion Card.  Two-year agreement required and smartphone data plan required).

For the complete array of AT&T offerings, visit www.att.com

(1) 3G coverage is not available in all areas.

(2) Coverage not available in all areas.

(3) AT&T Promotion Card: Price for HTC Aria before AT&T Promotion Card & with 2 year contract is $229.99. Allow 60 days for fulfillment. Card valid for 120 days wherever major credit cards accepted. May be used to pay wireless bill. Not redeemable for cash and cannot be used at ATMs or gas pumps. Some restrictions and other charges apply. See terms at store or at att.com/wirelessrebate. You must be customer for 30 consecutive days to receive Promotion Card.

(4) Limited-time offer. Other conditions & restrictions apply. See contract & rate plan brochure for details. Early Termination Fee: None if cancelled in the first 30 days, but up to $35 restocking fee may apply to equipment returns; thereafter up to up to $325.

*AT&T products and services are provided or offered by subsidiaries and affiliates of AT&T Inc. under the AT&T brand and not by AT&T Inc.