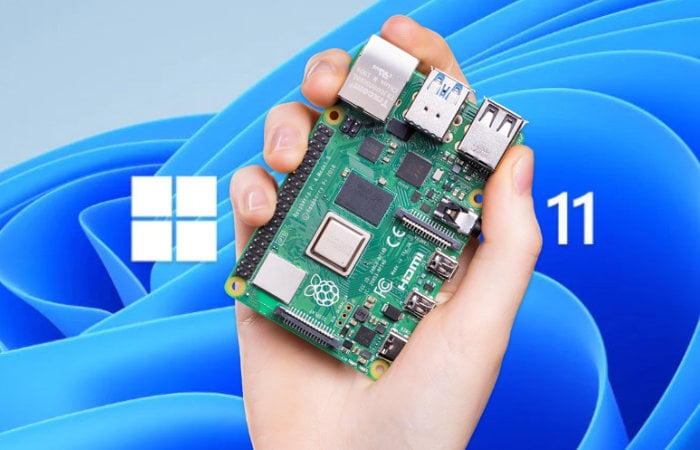 If you are interested in trying out the new Microsoft Windows 11 operating system which was launched last month and will be officially available later this year sometime possibly around October 2021 but don’t fancy installing it on your main Windows PC. You may be interested to know that you can install Windows 11 on the Raspberry Pi 4 mini PC. Allowing you to test out the new features of the latest Microsoft operating system without the need to cause any problems with your current desktop PC setup gaming rig. Check out the video below to learn how to install Windows 11 on the Raspberry Pi.

The Raspberry Pi 4 is available to purchase from just $35 and is available with a choice of RAM options either 2,4 or 8GB depending on your needs. The Pi mini PC is also equipped with a more powerful processor in the form of an ARM 1.5GHz 64-bit quad-core CPU and is equipped with 2.4 GHz and 5.0 GHz IEEE 802.11ac wireless, Bluetooth 5.0, BLE as well as a Gigabit Ethernet connection and 2x USB 3.0 ports; 2x USB 2.0 ports.

Windows 11 is available to download from free if you sign up to the Microsoft Windows Insiders program allowing you to easily install it on any compatible PC. Microsoft has also hinted that they will be rolling out a free upgrade for existing Windows 10 users sometime early in 2022 although full details on how this will be released have not yet been confirmed, but as soon more information is made available we will keep you up to speed as always.

“In this video, I show you how to install and set up Windows 11 on The Raspberry zPi 4 or Pi400. This will work from an SD card but I recommend using a USB drive SSD or M.2 drive because it will definitely help out with performance. This is not meant to be a daily driven OS for the Pi but it’s still really awesome that Windows 11 works on the Raspberry Pi! I also show you how to overclock windows 11 on the pi to get a bit more performance out of it.”