A new hack using Microsoft’s Kinect motion controller together with a Windows Phone, has been published on YouTube by user programming4fun. Which demonstrates whats possible when you combine the two to create a Holographic Games Engine. In the video after the jump you can see as the 3D engine adjusts the image accordingly adapting to the users position, to give the illusion of a real 3D object. 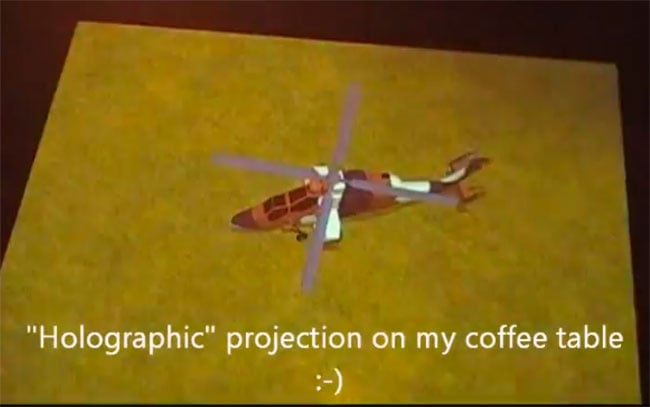 The hacked 3D engine also supports anaglyph 3D (red/cyan glasses) to provide an even greater 3D effect in real life. The Window Phone is running a custom application that has been designed to provide controls for the helicopter using the Windows Phone built in accelerometer.

“Another quick hack using the Kinect beta SDK and my new Windows Phone (which is great!). What you see is a simple game engine utilizing the pseudo-holographic effect from my other videos. A Kinect “sees” the position of the viewer and the 3D engine adjusts the image accordingly to give the illusion of a real 3D object.”