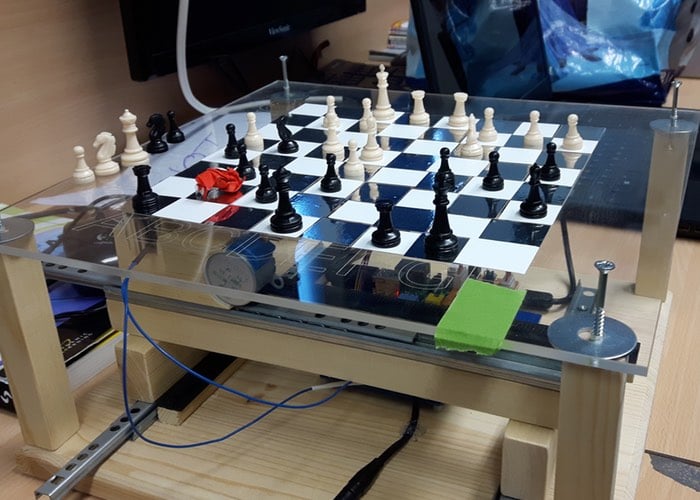 An awesome battle chess set has been built using a Raspberry Pi and a little inspiration from the Harry Potter movies by a maker that had previously no experience playing chess or with robotics.

Check out the video below to see the battle chess set in action and learn more about the construction which uses two 28BYJ-48 stepper motors, along with a 4tronix PiStep board in order to move the framework.

Its creator explains a little more about the inspiration and build process :

I’ve had this idea for nearly a year now that the version of chess in the Harry Potter series should be made a reality. I knew that due to my inexperience of using the Raspberry Pi and my lack of knowledge about the game of chess or electronics, this project was going to be challenging project but I still felt that it was something that could be achieved using the contacts and resources I had at my disposal. I’ve been meaning to find a reason to fully complete this project, I thought that my A Level coursework would be the best excuse to make this idea a reality.

After some browsing of the internet, looking at various robotic contraptions used to make a similar system through the years, I decided to base my main system on the system found here: http://www.instructables.com/id/How-to-Build-an-Arduino-Powered-Chess-Playing-Robo/#step0 I felt that this was as similar to the initial idea I had considered. Thankfully, the website gave instructions on how to construct the system which meant less planning for me, which is always good for the time constraints of A Level coursework.

For more information on the new Raspberry Pi powered battle chess set jump over to the Kent Raspberry Jams website for details by following the link below. If you found this article interesting you might also be interested in this list of awesome Raspberry Pi Zero projects we have put together.