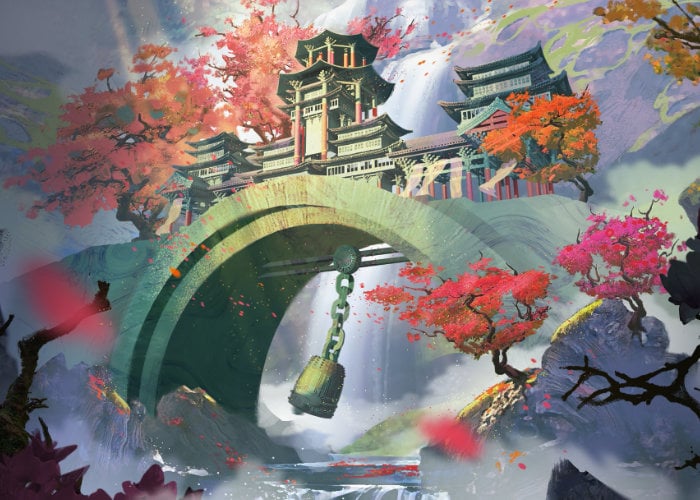 ArenaNet has announced this week development is underway for a third Guild Wars 2 expansion, although very few details apart from a picture have been released by the team at the current time. As well as announcing the third expansion for the Guild Wars 2 online role-playing game, new content in the form of “Visions of the Past: Steel and Fire” will be arriving next week and will be available to play from March 17th 2020 onwards.

“The team is hard at work, and it’s much too soon to talk about any details right now, including features, story, release date, or development timeline. We’ll have to stick to that until we’re ready to reveal more information to the world. When we are ready, you’ll definitely know! Thank you for your patience and support. We’d like to leave you with a piece of early concept art so you can dream along with us about where we’re headed…”

– Festivals – Our next release following “Steel and Fire” is Super Adventure Festival, when Moto will open up the Super Adventure Box in Rata Sum again to welcome all jumping, bauble-collecting heroic types. As summer heats up, we’ll bring back Dragon Bash to celebrate your victories against the Elder Dragons with hologram battle challenges, fireworks, racing, and treats. Both festivals will feature traditional activities, annual achievements, and new rewards.

– Living World – The major release following Super Adventure Festival is the third episode of The Icebrood Saga, in which we’ll get some respite from the bitter cold. Bangar’s war machine has driven out of the Far Shiverpeaks and farther west, to the dense forests of the Woodland Cascades—an area inspired by the beautiful Pacific Northwest that ArenaNet calls home. The episode’s environment will focus on capturing and defending territories in a PvE map, using objectives similar to WvW to drive enemies back, defeat familiar foes, and maximize the potential for rewards. You’ll also tackle a new Strike Mission with a different spin on gameplay mechanics.

– Systems – Next week, on March 17, manifest your power where everyone can witness it by crafting the legendary amulet Transcendence in PvP and the legendary ring Conflux in WvW! Competitive players can also look forward to the return of the Tournament of Legends toward the beginning of summer. We’re planning to bring back some of the bonus PvE events we ran in 2019 and introduce a new one as well.