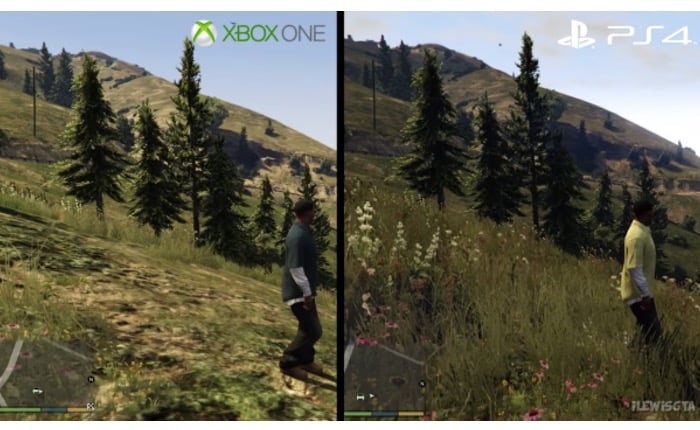 New footage of what the GTA V Playstation 4 vs Xbox One gameplay looks like compared has been revealed this week. Showing just what you can expect from both of the next generation game consoles playing GTA V that launched earlier this week on November 18th 2014.

In the video below both GTA 5 versions are running at 1080p, 30FPS with the same settings and as you can see for yourself there are some big differences, which version do you think looks better?

If you have been wondering what the graphical differences might be between the next-generation PlayStation 4 and Xbox One consoles are, you needn’t guess any longer as YouTube user iLewisGTA has created a new video published below, demonstrating the two versions side-by-side, to make it easy for you to compare both GTA V PS4 and Xbox One before you purchase.

If you are interested you can also see the PlayStation 4 footage compared to the older generation PS3 following this link. The PC version of the GTA V game will be launching on January 27th 2015 and is expected to blow both the graphics of the PS4 and Xbox One away. Rockstar Games explains :

“Grand Theft Auto V for PlayStation 4, Xbox One and PC will also feature enhanced radio selections with over 100 additional new songs and new DJ mixes from returning DJs across the game’s 17 radio stations.

A host of new, exclusive content also awaits for players returning from the PlayStation 3 and Xbox 360 versions including rare versions of classic vehicles to collect from across the Grand Theft Auto series such as the Dukes, the Dodo Seaplane and a faster, more maneuverable Blimp; activities including wildlife photography and new shooting range challenges, new weapons and more.”

For more information on the new GTA V jump over to the Rockstar website for details.