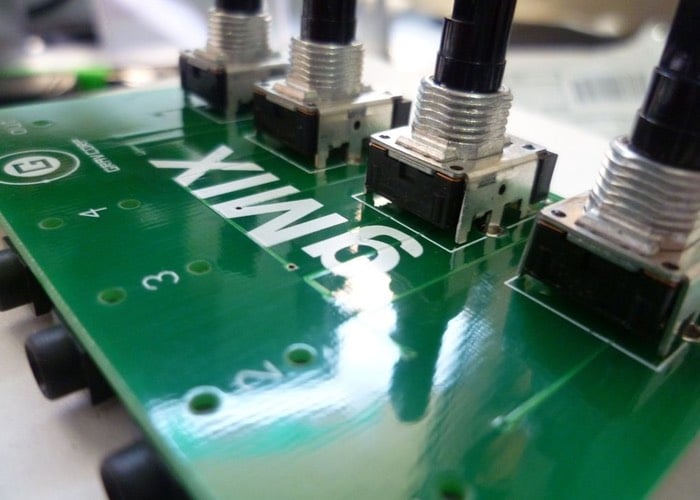 Anyone looking for a 4 channel stereo mixer that is capable of working without batteries maybe be interested in a new device called the gMIX that has been designed by Grav Corp.

The gMIX has been created to enable you to mix anything that is equipped with a headphone jack and can be seen in action in the video below.

The gMIX is currently over on the Kickstarter website looking to raise just $1,000 to go into production and has already blown past that goal with still 25 days left remaining.

“At Grav Corp, everybody’s a musician. We love to experiment with all kinds of gear. Guitars, drum machines, samplers, synths – you name it, we’ve spent an afternoon using it to annoy the neighbours.

These days, there’s a lot of choice out there. Scratchpad gear like the KORG volcas, Teenage Engineering’s Pocket Operators, and iPad music apps all offer fun new ways to create music. But it’s often hard to use them together. We found ourselves ending up with a mess of patch cables tied into bulky traditional mixers, and were having more headaches than fun.

This is where the gMIX comes in. It features four 3.5mm stereo jacks, which you can use to plug in just about any modern electronics with a headphone output. Volcas, iPads, KAOSS pads, just about anything you can imagine. You can even DJ with four iPods with this beast. You get a volume control on each channel and it all gets sent to a single 3.5mm stereo output. Easy, right?

Right now the bareboard gMIX is ready to go. We’ve got production-ready samples here in the lab. The aluminium case for the gMIX is undergoing a redesign, to fit into a 1590B case for a sleeker, more compact look. We’ve worked with casing manufacturers before, and will order these once we reach our campaign goal.
We’ve tested the gMIX extensively and had a lot of fun doing it. After careful refinement, we’ve worked with manufacturing partners and we are ready to go into production. All we need now is your help! Pledge to the campaign to get your own gMIX, and get ready to jam!”

For more information on the new gMIX jump over to the Kickstarter website for details and to make a pledge from $35.