Samsung is expected to unveil Galaxy Note3 in less than two weeks in Berlin on September 4. The flagship phablet is not a secret anymore and we know more than enough about its specifications. We are one step closer to the imminent launch of Galaxy Note 3 as the device has received Bluetooth SIG certification. The devices usually make a pit stop at Bluetooth SIG and other regulatory authorities, ahead of their market launch. 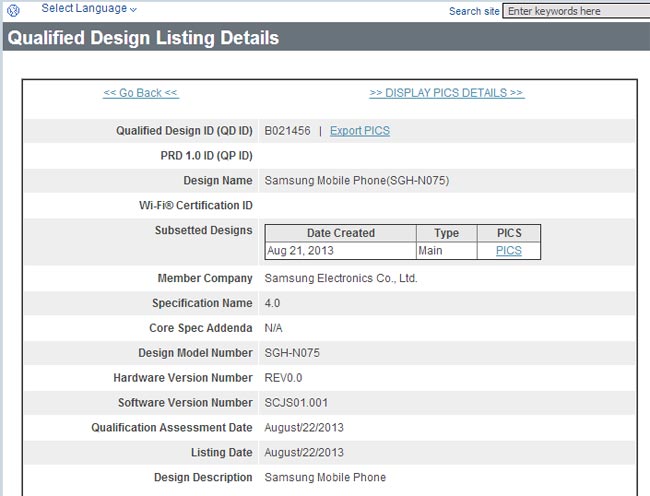 The device is expected to feature 5.7 inch Super AMOLED display boasting a resolution of 1920 x 1080, 3GB RAM, quad-core Snapdragon 800/ Exynos 5 Octa SoC, 32GB internal storage with a microSD card slot, 13-megapixel rear camera, a massive 3,200 mAh battery and will run Android 4.3 Jelly Bean on top of it. The device is expected to hit the market by the end of September in three colors: black, white and pink.

The bad news is that the Exynos 5 Octa version will not be available at launch and only the Snapdragon 800 variant will be available for sale. This is because the Korean giant is having issues with Exynos 5 overheating and it might take some time before the company can tackle this issue. Although we do hope that both variants are available as they are designed to cater different regions worldwide.

The device is expected to make an official appearance on September 4, just before IFA kicks off in Berlin. Stay tuned as we will share with you any information we can get about the device.