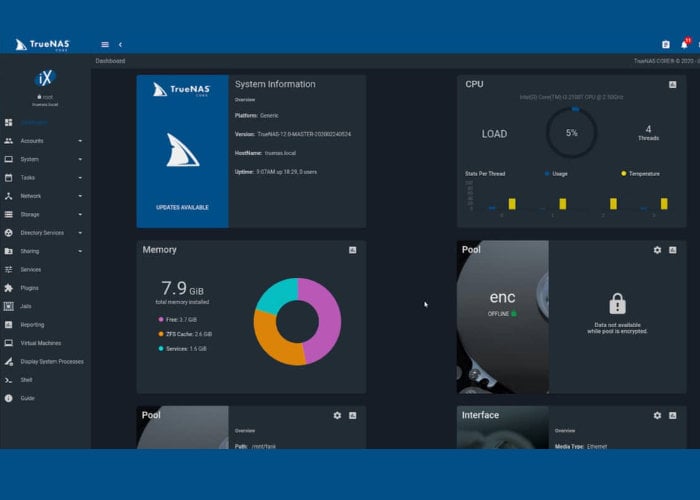 iXsystems the development team behind the FreeNAS is a free and open source operating system designed for network-attached storage (NAS) devices who also create TrueNAS the enterprise version, have announced that they will be merging the two operating systems.

TrueNAS will be the name going forward and two different versions will be made available the TrueNAS CORE: open source edition (CORE stands for Community Supported, Open Source, Rapid Development, and Early availability) and the TrueNAS Enterprise: commercial version with enterprise management and support.

Benefits of combining FreeNAS and TrueNAS include :

– Rapid Development: Unified images accelerate software development and releases (for example, 12.0 is a major release that would normally have taken 9-12 months to release, and with these new efficiencies, iXsystems can bring that closer to six months)
– Improved Quality: Reduced development redundancy and unified QA increases software quality and allows the company to streamline testing
– Earlier Hardware Enablement: Staying in-sync with upstream OS versions will be easier, allowing earlier access to newer hardware drivers. For instance, 12.0 brings improved support for AMD EPYC / Ryzen platforms and enhanced NUMA support for more efficient CPU core handling.
– Simplified Documentation: Unified documentation eliminates redundancy such as separate user guides
– Reduced Redundancy: Unified web content and videos refer to one software family without the need for duplication.
– Flexibility: Unified images enable simpler transitions or upgrades between editions
– Resource efficiency: frees up developers to work on new features and related products
– Open ZFS 2.0: The planning for the “unified” 12.0 release began over a year ago and included the major investment in the development and integration of what will soon be released as “OpenZFS 2.0”. This effort is fast-forwarding delivery of advances like dataset encryption, major performance improvements, and compatibility with Linux ZFS pools

“For over twenty years, iXsystems has been the go-to company for storage and servers driven by Open Source, and we’re also the developers of FreeNAS. With our unique convergence of hardware, software, and storage expertise, we bring you the award-winning TrueNAS flash-turbocharged enterprise-grade open storage platform, offering reliability and performance at a value unheard of in storage. TrueNAS unifies storage access, grows to nearly 10PB in a rack, is available in hybrid and all-flash configurations, has features that let you move away from the cloud saving over 70% over AWS, and uses the ZFS file system to guarantee data stays pristine and safe.”

Features of TrueNAS include :

– True Scalability : ZFS is a future-proof 128-bit “scale up” file system that is designed for decades of continuous use. TrueNAS grows from hundreds of GBs to 10PB per system and is designed to make the increase in capacity painless.
– True Flexibility : TrueNAS offers flexibility of choice, providing SMB, AFP, and NFS for file storage, iSCSI and Fibre Channel for block storage, and S3-compatible APIs for object storage. Every common operating system, hypervisor, and application is supported. TrueNAS uses OpenZFS to provide unlimited point-in-time snapshots, allowing you to roll back and access previous data versions. TrueNAS is a proven way to mitigate virtual machine corruption, user error, and ransomware attacks.
– True Performance : The flash-turbocharged TrueNAS delivers a perfect balance of price and performance that puts many all-flash arrays to shame. It uses TrueCache™ to leverage RAM, flash storage, and spinning disks for flash-like performance with spinning-disk capacities and economics.
– True Freedom : TrueNAS is the enterprise version of FreeNAS, the #1 software-defined storage operating system. With TrueNAS, iXsystems has delivered the enterprise-grade OpenZFS file system to more users than anyone. We pride ourselves on working closely with the Open Source community to help make OpenZFS the greatest filesystem ever written.