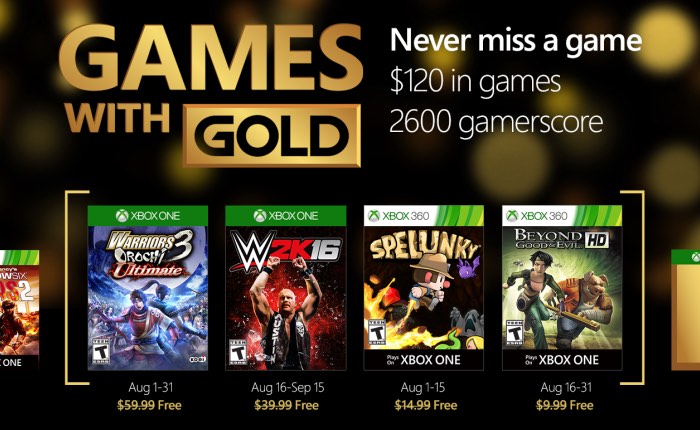 Major Nelson has today unveiled the next games that will be made available for free to Xbox Gold subscribers during the Xbox Live Games With Gold promotion for August 2016.

Next month’s games provides $120 worth f games for free, that will start rolling out on August 1st with the release of Warriors Orochi 3 Ultimate which has a recommended retail price of $59.99. Check out the video below to learn more about all the titles that will be made available during August 2016 for Gold Xbox members.

August 2016 will see the Games with Gold roster take on four newcomers – and four fantastic games, at that. As with last month, Xbox One will get two dedicated titles, and two Xbox 360 titles, as well, through Xbox One Backward Compatibility, for a total of four completely free titles thanks to Games with Gold. Xbox 360 gamers, of course, also get access to the latter two titles.

For Xbox One, August brings two fantastic titles to Games with Gold with the exciting Warriors Orochi 3 Ultimate and the blockbuster wrestling game WWE 2K16. On the Xbox 360 (and Xbox One through Backward Compatibility), Xbox Live Gold members start the month with the critically-acclaimed Spelunky, and then follow that with the classic Beyond Good & Evil HD.

As usual, all games are available only for a limited time, as part of the ongoing Games with Gold program, so sign up now to get in on the action!