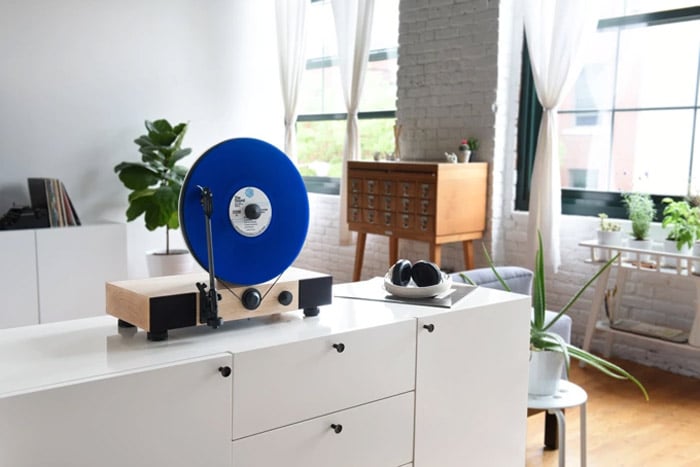 Even though the MP3 replaced the record, CD, and cassette tapes years ago, many audiophiles still prefer the sound that a vinyl record offers. If you are a fan of vinyl who is looking for a new record player, something awesome has turned up on Kickstarter. The record player is called the Floating Record Vertical turntable and as the name suggests, the record is held vertically.

When seen from across the room the record seems to float in the air. The turntable is available with a walnut or maple base to fit with your décor. It can play 45rpm or 33 1/3 rpm records and the speed is changed by placing the drive belt on a different pulley. The device has integrated stereo speakers that produce full-range sound.

If you have a fancy speaker system in your home or office, you can connect it to the turntable as well via RCA outputs. The Floating Record is on Kickstarter now seeking $50,000 and has raised over $177,000 with 34 days to go. You can pre-order a Floating Record turntable for $349 with shipping expected in December 2015. The normal retail price will be $449 once the turntable is in stores.