We first featured the matchbox creations of Chris Burden back in 2010 when he was building the framework for his artistic Metropolis II Matchbox Car Cityscape which is 10ft tall and 28 ft wide. Burden’s kinetic sculpture Metropolis II is a massive cityscape where more than a 1,000 toy cars racing down 18 lanes of freeways continuously.

The Match Box cityscape took artist Chris Burden, and his chief engineer Zak Cook, together with ten assistants four years to build in his Topanga Canyon studio, and now the Metropolis II has now been sold for millions of dollars and can been seen in all its glory in the video after the jump. 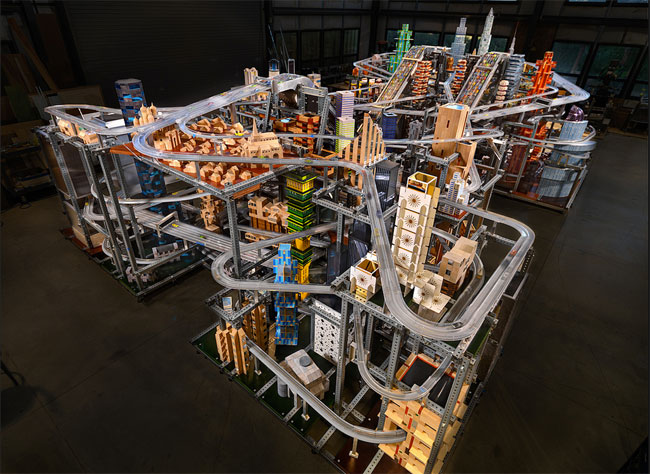 Each Matchbox car has a magnet attached to the bottom of it which allows the cars to be pulled back up the track in a continuos motion. Although like any Metropolis there are a few accidents and the Matchbox cars do fly off every now and then and the structure is being continuously tweaked help keep the cars flowing smoothly.