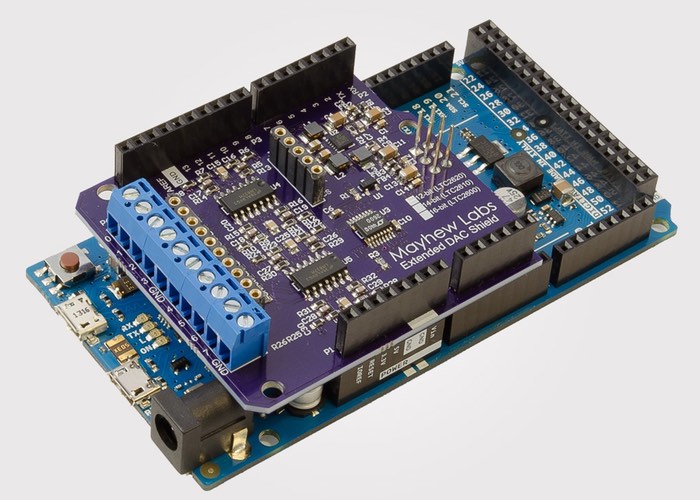 Mayhew Labs have unveiled a new DAC add-on board they have created for the Arduino platform in the form of the Extended DAC Shield that takes the form of a high-speed, precision, eight channel, -10V to +10V analog output board.

Features of the DAC Shield include a 50kHz maximum single channel output speed, with around 20kHz “usable” speed together with compatibility for both 3.3V and 5V communication-level Arduinos.
Its creators Mayhew Labs explain little more about its functionality and design :

The Extended DAC Shield is a high-speed, high-precision, eight channel, -10V to +10V analog output shield for the Arduino. The design will be open source with schematic, layout, and source code freely available. Below I will outline some of the features and applications of the Extended DAC Shield, explain how it works, and show some oscilloscope captures of its performance.

• Eight channels of -10V to +10V single-ended analog outputs
• Output voltage accuracy better than 0.5%
• Communicates with the Arduino over the SPI header, making it compatible with all Arduino variants
• Solder jumpers to bypass the standard Arduino connections for SPI communication and instead use user-defined connections.
• Outputs can be connected using screw terminals or 0.1″-pitch header
• Comes with stackable headers installed

For more information on the new Extended DAC Shield jump over to Kickstarter crowdfunding website where it is now available to pledge for priced at just $20. If you found this project interesting why not build your very own Arduino wind speed meter or anemometer to record the wind speed in your area.