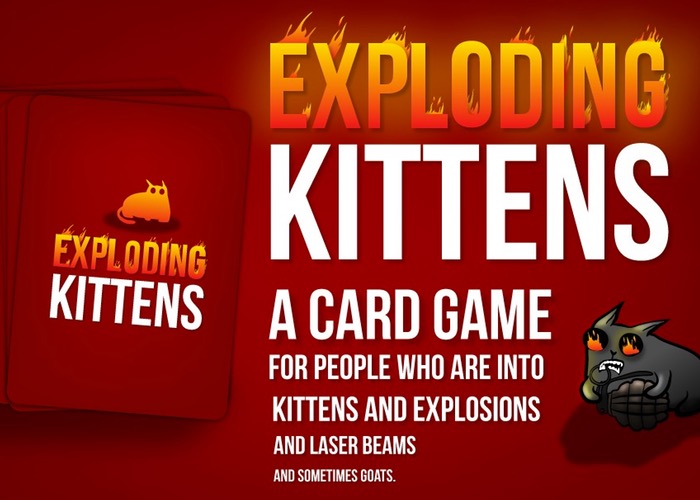 A new card game called Exploding Kittens has taken Kickstarter by storm this week raising over $2.5 million in just the first few days of launching its campaign.

The new card game has been designed by Elan Lee and takes the form of a modern take on an classic “Incan Gold” Style card game, where you pull cards until an Exploding Kitten card is uncovered. Watch the video below to learn more about the gameplay.

“Exploding Kittens is a highly strategic kitty-powered version of Russian Roulette. Players take turns drawing cards until someone draws an exploding kitten and loses the game. The deck is made up of cards that let you avoid exploding by peeking at cards before you draw, forcing your opponent to draw multiple cards, or shuffling the deck.

The game gets more and more intense with each card you draw because fewer cards left in the deck means a greater chance of drawing the kitten and exploding in a fiery ball of feline hyperbole.

The game was created by Elan Lee (Xbox, ARGs), Matthew Inman (The Oatmeal), and Shane Small (Xbox, Marvel).  We think this game combines all the things we’re best at creating, and and put together this Kickstarter campaign because we can’t build this without you.
So if you’re into card games or laser beams or weaponized enchiladas, please help us make this game a reality.  We think you’ll love it as much as we do.”