If you enjoy playing your PS3 games. How would you now like to play those games on your iPad or iPhone? EveryAir a new app under development from pandaelf Labs together with a little tweaking of hardware and software, allows you to play PS3 games on an iPod, iPhone, and iPad, including GT5 on an iPad.

Watch the video after the break and see how a number of the hurdles with the setup and design of the app designed to play PS3 games on a touch screen device have been overcome. To overcome the lack of controller of iOS devices a number of controls for games being mapped to gestures on the iOS devices. 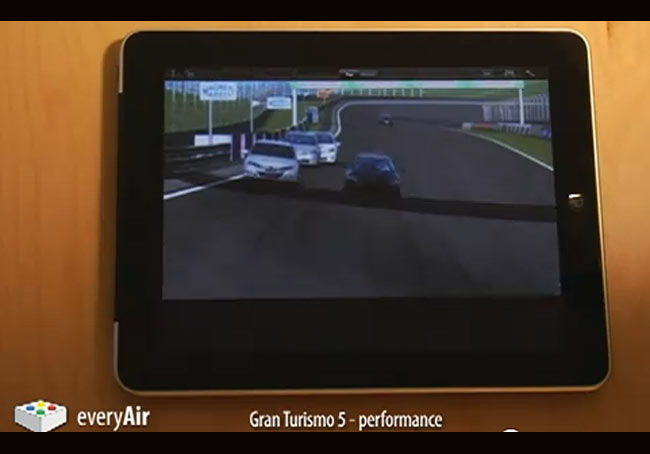 The big question is whether Sony will ever allow its PS3 to run software. Lets hope so! But somehow I think Sony might have other plans than allowing third-party software to run on their PS3 in light of recent PS3 news. Check out a quick FAQ about the new EveryAir software after the video.

Q: What’s the overall picture for how this works?
A: The trick is to connect a capture device and a USB mouse/keyboard device to the PS3. The capture device sends video data to the PC, and the USB keyboard/mouse sends the button presses. On the PC itself, you run a custom build of everyAir which understands custom gestures and pipes the input to the PC which then sends it to the PS3 via the input interpreter.

Q: What were some of the hurdles?
A: There are two problems to solve: sending the video signal to the iOS device and sending back input from the iOS device. Sending the video signal is solved by using an off the shelf capture device, and then sending back the input is a combination of a custom build of everyAir with an off the shelf mouse/keyboard device that connects to the PS3.

Q: How do you send input to the PS3?
A: Using one of those USB Keyboard/Mouse devices. For example, Eagle Eye (search for it on Amazon).

Q: How do you get the video signal from the PS3 to the iOS device?
A: We do this by using an off the shelf capture device. The capture device connects to the PC, TV, and to the PS3. The result is that a livestream of the PS3’s video signal ends up on the PC.

Q: How do you connect to the PC from the iOS device?
A: Using everyAir – our remote desktop application.

Q: How does everyAir understand the game gestures?
A: We’re using a custom build of everyAir, and it’s hardcoded to understand these gestures. Additionally, it knows how to pipe input to the mouse/kb device in a way that it expects.

Q: Will this be publicly available?
A: We plan to release a fully customizable version at some point in the future.