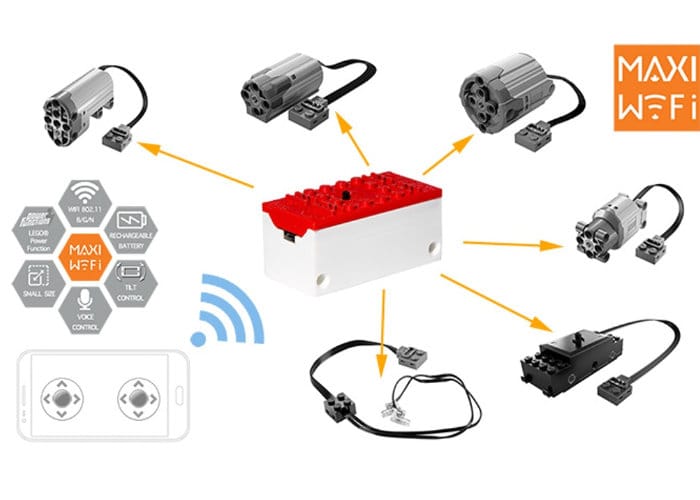 LEGO builders searching for an easy way to add wireless remote control systems to their Lego projects may be interested in a new system called MaxiWifi, designed to provide a small Wi-Fi RC brick with rechargeable battery specifically designed for compatibility with LEGO. Watch the demonstration video below to learn more about the control system that allows you to quickly connect your LEGO projects to the Internet of Things.

Features of the system include compatibility with IEEE 802.11 b/g/n wireless technologies, a variety of different control methods, and Over the Air (OTA) upgrades, firmware updates over the WiFi network. MaxiWifi has this week launched via Kickstarter to raise the required funds it needs to go into production. Pledges start from just £50 or CAD$89 for super early bird backers offering a 29 percent saving off the recommended retail price which will take effect once the Kickstarter campaign concludes. If all goes well, backers can expect to receive deliveries during September 2018.

“Maxiwifi is a remote control brick for LEGO power function Models. Connect via WiFi on your Android devices; you can control you own  LEGO models with the app within a large range. This amazing brick is powered by a rechargeable battery that provides a better and greener way of playing your LEGO models.”

Maxiwifi has been designed to function as an access point and broadcast a WiFi signal allowing users to connect projects to their smartphone or tablet using Wi-Fi, adding the ability to control Lego models using supported applications. For more information, full specifications and all available pledges, jump over to the official Kickstarter crowdfunding campaign page by following the link below.