A while back we wrote glowingly about the DTV Shredder, a tracked off road beast that was dubbed the Segway tank. Thanks to its outdoor application a new variant of the Segway tank has been unveiled for potential sales to the U.S. Army. Seen below is the Jackal, a fearsome moniker for a tricked out DTV Shredder. Look, it’s armed with grenade launchers! 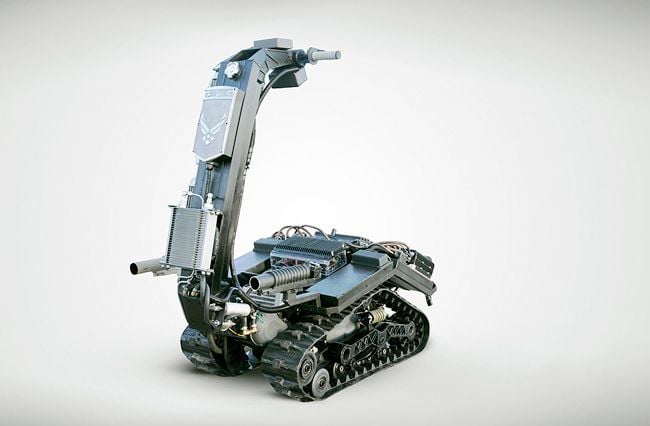 Actually those twin grenade launchers are a bad idea. And while the DTV is great for rugged terrain, keep in mind it offers little armor protection for troops. Sure, it would make an adequate remote controlled firing platform, but that doesn’t mean it’s immune to small arms fire or explosive charges.

Anyway, we’re spoiling the fun here. We’re sue grunts will enjoy the Jackal to bits if the U.S Army and the other branches place bulk orders.

The DTV Shredder has been under development for some time now and will soon be commercially available to outdoor enthusiasts and survivalist types. But with the Jackal, the guys behind the DTV want to usher in a new era of off road rides for individual personnel in combat missions.

Oh, and one unsolicited last idea; maybe instead of grenade launchers at the bottom, find a way to attach a rifle mount between the steering handles. That way, a mobile trooper riding the Jackal can also defend him/herself. Talk about 21st century cavalry.