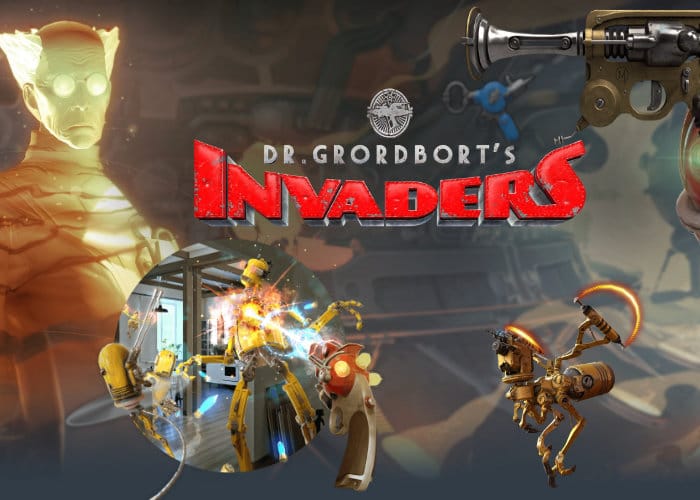 Dr. Grordbort’s Invaders the game plaster one of Magic Leap One’s premier IP titles has been confirmed this week to be launching on October 9th, 2018 stop to coincide with Magic Leap’s first annual L.E.A.P. Con developer conference which will be taking place this week. The new AR game features galactic superstars Stephen Fry and Rhys Darby. Watch the quick teaser below for a brief introduction to the game what you can expect.

“The evil robots from the Robot Planet have chosen this building, this very room, to stage their invasion of Earth through port holes in your walls and floor. So you’d better grab your ray gun, get blasting and send them back home in pieces. Adventure has never been bigger, gameplay has never been this immersive, and characters have never been so believable that you have to take cover behind the couch.

“The magic of Lumin OS planes and meshing API makes Dr. Grordbort’s Invaders fully interact with your world. Robots come through the walls, the floor — even from behind your couch. And with the GPU and CPU engine generating hyper-real visuals, every Probebot, Simpletron and Thugmobot will have you feeling like you’re really surrounded.”

More details on the Magic Leap Dr. Grordbort’s Invaders game jump over to the official website by following the link below.