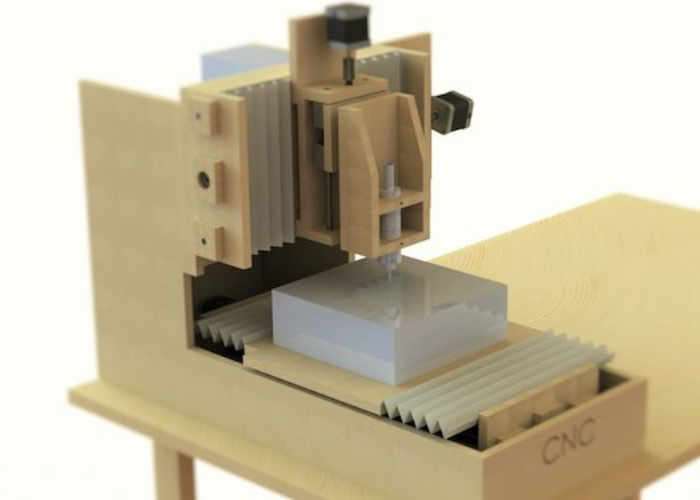 If you have dreams of owning your very own desktop CNC router but have been unable to afford the current range on the market, you may be interested in a new DIY CNC router which has been created by Thimo Voorwinden.

The less than €200 Thimo has created a CNC router which offers a work area of 200 x 2 50 x 100 mm and is powered by an Arduino Uno micro controller board equipped with a CNC shield.

As you can see from the image above the main material used in the construction of the desktop CNC router is MDF rather than metal, and is equipped with an offset motor with a flexible shaft to transfer power to the cutting head. Watch the video below to learn more.

Last year I got the idea to make a very basic CNC router. After exploring the internet and more specifically YouTube on homemade CNC’s I started making some concept designs and cost estimates. Having no particular goal for the CNC, I decided to build a CNC router small enough to easily fit on my desk that I can use to machine and engrave wooden parts with acceptable tolerances for wooden parts (±0,1 mm).

Machines like the Nomad 883 from Carbide3D, Carvey from Inventables and various others were definitely an inspiration, and the fact that this CNC router would cost less than 10% of these machines definitely made me exited to at least give it a try. Very early on I decided to film my ‘workbench’ and make a video series of the build process. You can find the videos I made plus additional information on this page!

Jump over to the Thimo Voorwinden website via the link below to learn more about the desktop CNC router as well as read full instructions on how you can create your own using a little MDF and Arduino hardware for under €200.