We can’t stress this enough. As the graphic below indicates, the Maersk Triple E is humongous beyond imagining. It’s so huge, its very presence in the high seas will upset global shipping costs. 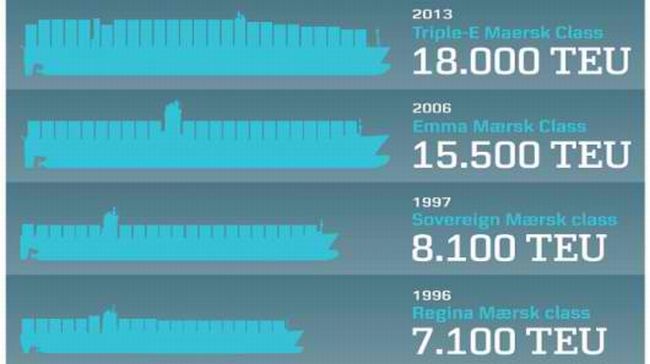 South Korea’s premiere shipbuilder Daewoo is tasked with completing the first batch of 10 Triple Es between 2013 and 2015. Another 20 will follow and once this massive armada is zipping across the world’s oceans, expect a new era of shipping to begin.

Here’s a good chunk of the official pres release to further explain matters:

“The new, giant container vessels will be known as Triple-E, based on the three main purposes for their creation: Economy of scale, Energy efficiency and Environmentally improved.

At a cost of USD 190 million per vessel — and therefore a contract value of USD 5.7 billion should the option for a further 20 be exercised — Maersk Line is buying the ships to position itself to profit from the 5–8 % growth in trade from Asia to Europe that the company expects, and to maintain its industry leading market share in the trade.”

It makes you wonder, if modern civilization’s indefinite perfectibility takes its natural course, how long before Daewoo is sending of massive starships to the starry heavens?