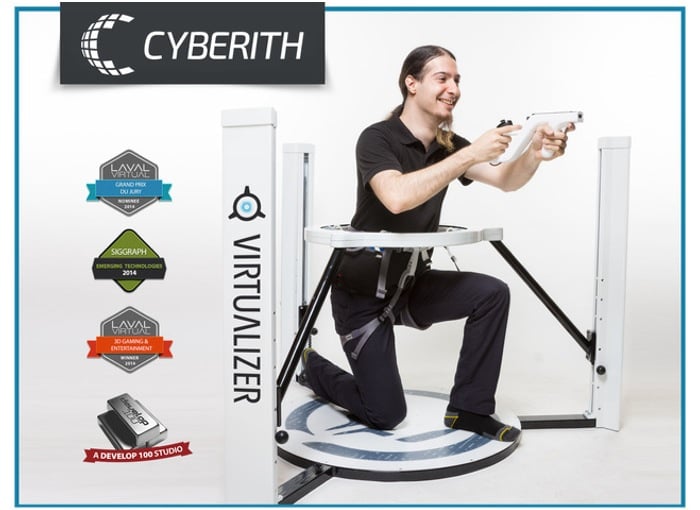 Cyberith Virtualizer is a new VR game system that has been designed to provide gamers with immersive virtual reality gaming at an affordable price, whilst playing games such as Crysis 3, Counter Strike Global Offensive and others.

The Virtualizer is an award-winning system designed for Virtual Reality that enables players to move freely within digital virtual environments. Watch the video after the jump to learn more about the Cyberith Virtualizer system and see it in action.

The Virtualizer project is currently over on the Kickstarter crowd funding website and has already blasted passes $250,000 pledge goal with still 25 days left to run of its campaign. Its creators explain a little more about the creation and inspiration behind their virtual reality gaming system.

“Who in the gaming community has never dreamt of getting rid of devices like joypads, mice and keyboards and switching to something more natural: Your own body. Why control your in-game avatar with buttons, when instead you could be the one walking through these beautifully crafted worlds.

Up until recently the answer would have been quite simple: It’s either technically impossible or at least not affordable for the consumer market. Well, not anymore, thanks to the Virtualizer, the most immersive gaming experience to this date.

Over the course of two years, we here at Cyberith have developed the Virtualizer, an easy to use virtual reality device that allows the user to walk through any kind of virtual environments in real-time. It does so by combining a revolutionary low-friction principle and high precision sensors with a special mechanical construction, resulting in a new form of omni-directional treadmill. To increase immersion even further, the Virtualizer is now equipped with vibration packs!”

So if you think Virtualizer is something you could benefit from, visit the Kickstarter website now to make a pledge and help Virtualizer become a reality.