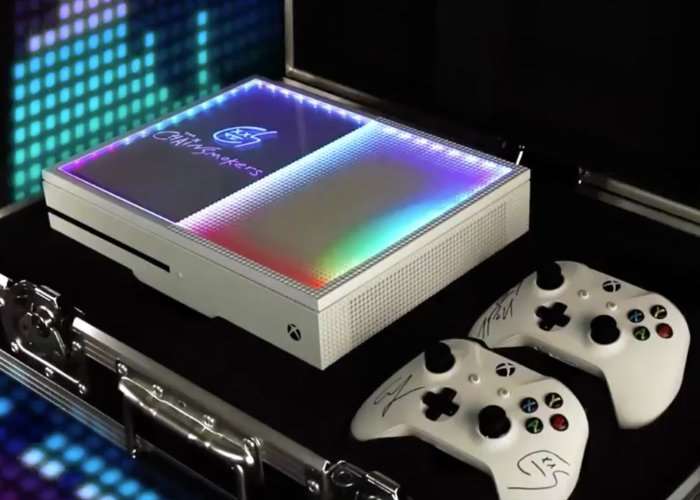 If you would like to win the custom Chainsmokers Xbox One S pictured above, Microsoft and DJ duo The Chainsmokers have combined forces to create the unique Xbox which is now available to win.

To build the custom Xbox One S console Microsoft and the Xbox team fitted the console with a tiny USB powered microprocessor that works in real time to convert sound into an ever-changing dynamic light show on the surface.

Equipped with 16 miniature pixels and a multilayered acrylic display the light show provides a 3D effect demonstrated in the video below. The Chainsmokers explain more :

We were really pumped to work with Xbox on this project and help bring our music to life in a new way, by combining it with the best gaming console in the world. – We knew the team would do something amazing, but when we saw the custom Xbox One S for the first time, we were both blown away by how cool the design is.

Over my time, I have seen many unique consoles come to life but nothing ever like this one. This is a true piece of art and we’re so excited that we got to partner with The Chainsmokers on it.

For more information on how you can win this unique Xbox One S console jump over to the official The Chainsmokers Twitter account or the Xbox Wire website by following the link below.

We partnered with @Xbox to create this this amazing Xbox One S console. Tell us in a Tweet why you love it so much to win! pic.twitter.com/r3OY1WCqWi