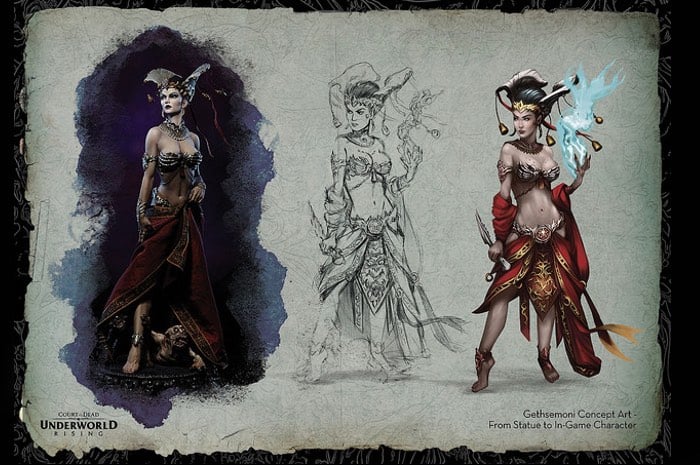 Tom Gilliland Chief Creative Officer & Court Creator from developer Sideshow has taken to the official PlayStation blog to reveal more details about the new game they are developing Court of the Dead: Underworld Rising.

Check out the latest gameplay trailer below to see a quick snippet of what you can expect from the game that will be available to see during the New York Comic Con from October 6-9th 2016.

The afterlife is many things, but peaceful is not one of them. Heaven and Hell are bent on consuming your soul, and that of all mortals. Death, the Grim Reaper, is struggling to overcome his dark nature to rescue both his world, and ours. Will you join Death and the Court of the Dead to fight for your afterlife?

In Underworld Rising, you join a faction and travel the Underworld, building an army of collectible followers. Journey on epic quests, defeat other-worldly enemies, and challenge other players to combat in order to grow your legend and play your part in the Underworld’s bid to Rise, Conquer, Rule!

At its core, Court of the Dead: Underworld Rising is a game about discovering the world around you while growing your legend and power. There are three factions in the Underworld, each with their own unique design and abilities.

Not only will players have the opportunity to choose their faction, but they will also have the chance to infinitely customize the unique look of their character. These choices will include gender (male, female, and gender-neutral) and countless accessories — body modifications, wearables, weapons, and spell effects.

Players will also have the opportunity to interact with Underworld NPCs in a way not often seen in 2D games. Relationships can be forged; every action you make could have consequences. Steal from a shopkeeper? Watch out for a bounty on your head. Want to take a headless NPC out on a date? Maybe skip going for tea.