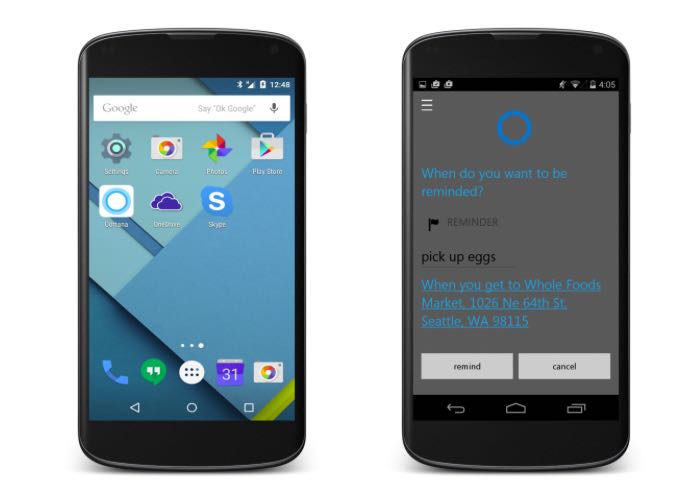 Microsoft has announced today more details about when Cortana will be available on Android devices, revealing that the Cortana Android beta testing will start next month in July 2015.

The Cortana beta testing was expected to start in June but after a slight delay will now be available on Android devices in its beta format to coincide with the launch of Microsoft’s Windows 10 operating system.

The beta Cortana Android app will be made available to test with Windows 10 on PCs and an iOS version of the application is already in development and expected to be launched before the end of the year.

Microsoft explains that by the autumn Cortana will have a range of new experiences on how they interact with Windows and Cortana including :

– Your Microsoft account helps keep your personal assistant connected to you across device experiences, whether on your PC, phone or Xbox One. Cortana’s Notebook will be available across your devices to keep track of details important to you. Cortana only knows what you want her to know and you are fully in control of how you use her across devices.

– On Xbox One, Cortana knows your friends and makes it easy to invite them to play with you through simple voice commands. If you want to record and share a clip of your game play, you can use Cortana to precisely control the length of the recording and quickly share it with your friends without leaving your game. Cortana will also help you find information about games, such as the release date of an upcoming game, or help you get achievements by surfacing videos and information to help you succeed.

– On your Android phone you can ask Cortana to remind you to walk the dog at 8pm in the evening, and then when you’re watching a movie your Xbox will interrupt playback to let you know it’s time to take the dog out.

– You can ask Cortana questions and she’ll give you answers, using the same natural language, regardless of which device you’re on. Want to know the weather tomorrow? Just ask Cortana from any device.