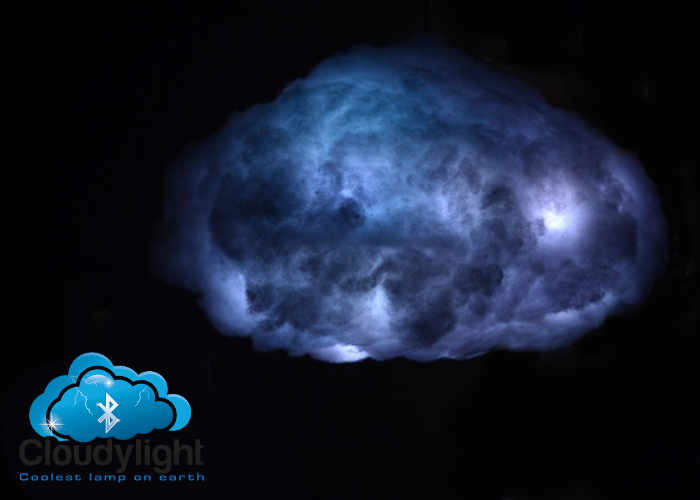 Those of you looking for a unique light to adorn your home may be interested in an interactive light which is equipped with its own built-in audio system which can be controlled using its companion smartphone application or supplied remote.

The Cloudylight as the name suggests takes the form of a thundercloud and is equipped with Bluetooth technology. Watch the demonstration video below to learn more about its design and functionality.

Its designer explains a little more about its inspiration and construction, and why he has taken to Kickstarter to raise the €4992 he requires to take the Cloudylight into production.

2 years ago after watching some videos from people creating lamps that looked like clouds I decided to create my own and go over the top with it while keeping price a big priority. Now after many prototyping it is finally close to running production but we need your help to finish it.

Imagine yourself laying on the sofa playing your favourite music through your Cloudylight with the best possible sound. Not your style? No problem, just open up the Android/IOS application on your phone or use the remote control and select “thunder mode”, this will create a thunderstorm from right in your room. Having a party? Select “Music responsive mode” and have the leds go in sync with the music.

The Cloudylight is made out of high quality plastic formed like a cloud. Inside the cloud there are 2 high-end Guy Bonneville Blam speakers which produce a clear sound and a heavy bass, 25 controllable leds and a custom made PCB with Bluetooth module. The Cloudylight weights just under 4kG and can be hanged on the ceiling by an all-in one cable which height can be adjusted to fit your needs.

You can control the Cloudylight either by the Android/Ios App or remote control. On top of the cloud casing there is high quality soft polyfiber to make it look like a real cloud. For the last 2,5 years we have been going through a lot of testing to make sure only the best quality is being used.

You can adjust the colors and the brightness of the leds, also you can select “auto color” which will make the colors change every 5 seconds by itself. “Auto color” can be used in each mode (light mode – thunder mode and music responsive mode) to create cool effects.

For full specifications and to make a pledge to own one of the very first off the production line for an early bird price of €299, with shipping expected to take place during October 2017, jump over to the official Kickstarter website via the link below.