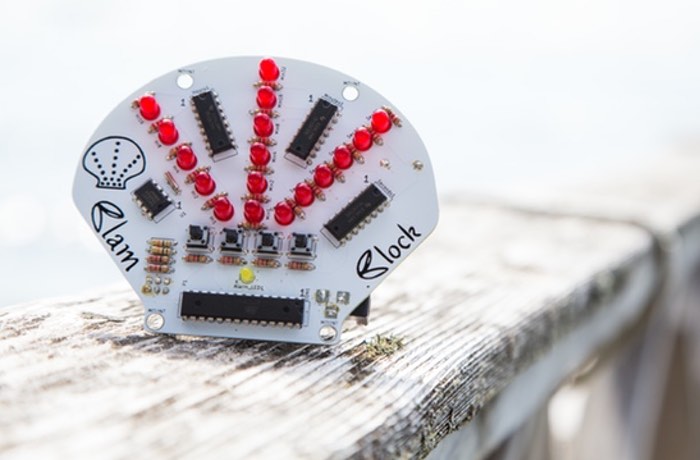 Anyone looking to learn more about electronics and soldering might be interested in a new DIY binary timekeeper called the ClamClock which has been created by Limbeck Engineering.

The ClamClock has been specifically designed to provide users with a high quality binary clock designed as a do-it-yourself project. Although the ClamClock is also available fully assembled if you would prefer.

Check out the video below to learn more about the features and functionality of this very unique timepiece which is now available to back Ryan Kickstarter with pledges starting from just $30 for early bird backers.

Our hope in designing ClamClock is to put a new and interesting twist on the binary clock by making one that is both technically interesting and visually appealing. We also want to create a kit that allows makers young and old to learn and get creative. And, above all, we want ClamClock to help inspire others to become as excited about engineering as we are.

As ten fingered creatures, we humans tend to use base ten numbers when counting. Binary numbers are in base two, a number system used by computers, which can only recognize two states – on and off. This may seem very complicated, but it’s actually quite simple to get the hang of. Check out the links below for some of our favorite videos on binary or check out the next section for a detailed description of how to read the clock.

Even with just the basics of binary under your belt, ClamClock is easy to read. Each column of LEDs on the clock can be read as a binary number, with each LED representing a different power of two – just like each digit in a regular base ten number represents a power of 10. As the graphic below shows, this makes reading the clock a matter of simple arithmetic; adding the value of each illuminated LED gives a number corresponding to either hours, minutes, or seconds. The clock is usually in 24 hour time, but can be switched into a 12 hour mode.

For more information on the new ClamClock DIY Binary Timekeeper jump over to the Kickstarter website for details and to make a pledge by following the link below.