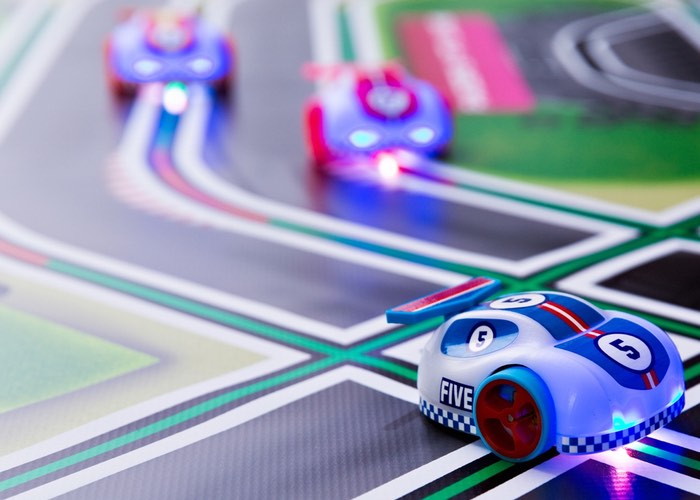 A new racing toy has launched via Kickstarter this month called CANNYBOTS Toys 2.0, that are described as providing the fun of slot car racing combined with an assembly system similar to that of Lego.

The CANNYBOTS racing cars have been designed to be programmable, smart and interactive and come complete with their own track enabling them to follow lines around the circuits.

Watch the video below to learn more about this unique fun and educational toy that has already blasted past its $40,000 pledge goal via Kickstarter.

• High Speed: With the default motors (included in the kit) a Cannybot can reach a straight line speed of up to 1.2m/sec (4ft/sec). You can also upgrade to high speed motors that are capable of reaching speeds of up to 2.4 m/sec (8 ft/sec).
• Incredible agility: Cannybot has independently powered wheels which makes it incredibly agile. It can spin on the spot and shoot off at high speed.
• Line following: Cannybot can detect black lines using the two optical sensors (eyes) on its underside. It then uses an advanced control algorithm to follow the line precisely.
• Colour detection: Cannybot has a third eye which is colour sensitive. It can detect colour patterns on the floor. Colour patterns can be used in various game play scenarios such as the start and finish line for racing.
• Bluetooth Interface: Cannybot communicates using Bluetooth LE. It can be controlled from almost any Bluetooth LE device including a Pebble watch (Yes, we are developing an app for that!)
• Over an hour of play life: The rechargeable Li-Ion battery gives over an hour of continuous use.
• Autonomous Navigation: Using the add-on navigation module you can achieve autonomous navigation. The Navigation module uses a precision gyro sensor, compass and accelerometer to determine heading and the distance traveled.
• Mood Light: Cannybot has a multi-colour glow light that can be controlled from an app; set it to the colour of your choice.