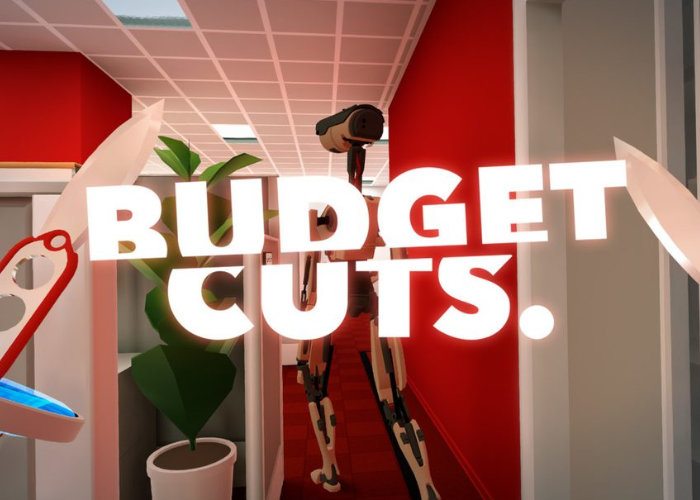 Olle Axelsson Game Designer at game development studio Neat Corporation, has taken to the official PlayStation blog to reveal more details about the arrival of Budget Cuts on the PlayStation VR platform. Budget Cuts is an action-adventure stealth game full of sneaking, stabbing, and robots which was built for virtual reality from the ground up and previously launches on PC. The game launch on PSVR has been delayed slightly but will now take place on September 25th 2020.

“We’ve had a blast packing in a ton of content in this game for you all – There are hours of gameplay in the main story that will take you through offices, factories and oh-so-many mail-rooms. Combine this with puzzles, stealth-or-stab moments, virtual cookies, shiny collectibles, as well as a boss fight (just for good measure), and you are up for a mixture of tension, action and laughs. We’ve also built an Arcade Mode that you access using the uh… *checks notes*… fully modeled and intractable arcade machine (because just a regular old menu would have been too easy) which brings a bunch of new levels and a competitive game mode to the mix. We can’t wait to see what you think!”

“So while a lot of the work we’ve put into the game so far has been in moving all the offices, factories, and mail-rooms of TransCorp over to PlayStation, we couldn’t resist building a whole new level in this wacky universe, designed specifically with PSVR in mind. We got a lot of inspiration and ideas from our NeatCorp discord community, and from folks on twitter, about what type of gameplay spaces they want to see more of in Budget Cuts – that’s how we ended up building Panopticon!”