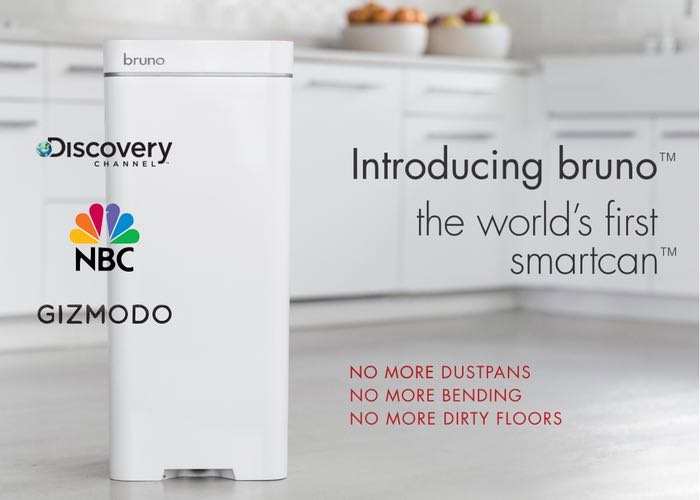 It seems s strange combination but Poubelle has created a new smart device in the form of Bruno which takes the form of the worlds first smartcan, combining both a trash can and vacuum in one device.

Simple brush any bits that maybe on the floor near the front of the trash can and the dust and bits are automatically hoovered up. If you too are amazed at the idea of such a device check out the video below to learn more from its developers.

The Bruno smartcan also has its own companion smartphone app that allows you to order bags and reminds you to put the trash out.

“Bruno and its patents pending technologies have been many months in the making. From developing the uncomplicated, graceful profile to its app connected reminders and efficient, quiet vacuum system, Bruno has been designed with the highest grade components to be the best and last trash can you will ever buy.

The powerful vortex vacuum feature will deliver every dog hair, cheerio and grain of dirt directly into the trash bag. No more stopping, no more scooping, just place the broom in front of the vacuum inlet to start the suction and Bruno will do the rest. Bruno will also remind you to take the trash out on trash day, and alert you when you are low on Bruno Bags. How smart is that ? (Bruno will also accept standard kitchen trash bags)”

The Bruno smartcan is available over on the Kickstarter with pledges starting from $139 and finishes in arctic white, slate grey, harbour blue, urban red and stainless.