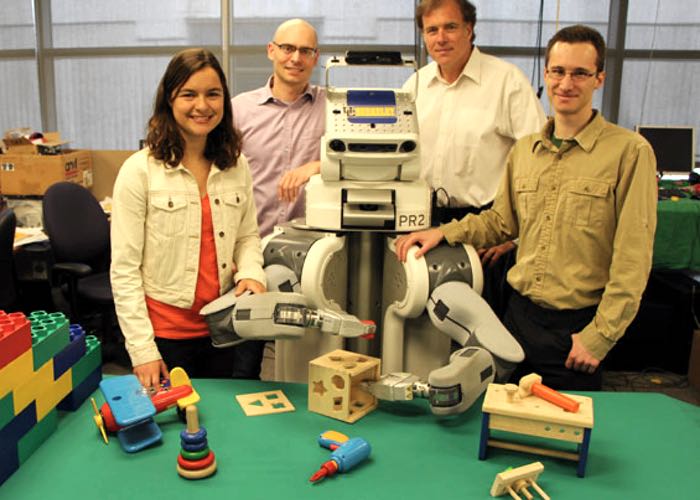 A new robot with learning algorithms has been unveiled this week called BRETT or Berkeley Robot for the Elimination of Tedious Tasks, and as the name suggests has been built by the Berkeley Robot Learning Lab.

The PR2 BRETT robot has bee developed to learn by making mistakes and using trial and error, correcting failures using its programmed algorithms to try and solve simple problems on its own.

Watch the video below to see BRETT in action and see a glimpse of what we can expect in the future. The team at UC Berkeley researchers includes (left to right in the picture above) : Chelsea Finn, Pieter Abbeel, BRETT, Trevor Darrell and Sergey Levine. Professor Pieter Abbeel of UC Berkeley’s Department of Electrical Engineering and Computer Sciences explains :

“What we’re reporting on here is a new approach to empowering a robot to learn,”-“The key is that when a robot is faced with something new, we won’t have to reprogram it. The exact same software, which encodes how the robot can learn, was used to allow the robot to learn all the different tasks we gave it.”

For more information on the new BRETT robot jump over to the Berkeley website for details via the link below.