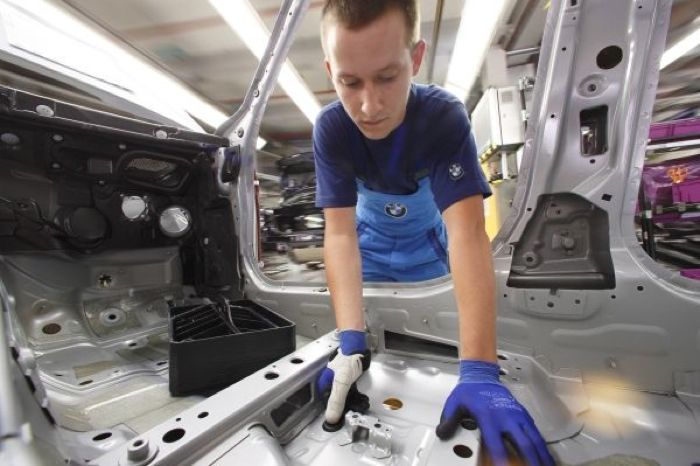 Car production is mainly automated with the heavy work done by robots at the major car manufacturers, although some of the work is done by people, and now BMW has come up with a new way to help its workers out during the production of their vehicles.

At one part of the BMW production plant workers spend a lot of time fitting rubber plugs to the vehicles, these plugs have to be pressed onto the vehicle using your thumb, the work is repetitive, and BMW have come up with a novel way to ensure their workers don’t damage their thumbs, using 3D printed thumbs.

The innovative orthotic devices are applied as part of a pilot project in an assembly area where rubber plugs are fitted. These have to be pressed in with the thumb and close, among other things, the drain holes for the paint coat. Even for people with strong hand muscles, this movement requires a certain effort. In order to prevent the unnecessary overstretching of the thumb joint, the finger cots made of thermoplastic polyurethane are put over the thumb like a second skin. Right at the thumb joints, the assembly aid is open to allow the thumb to move without restriction. At the back of the thumb, though, the plastic material is reinforced. If the thumb is stretched, as in a ‘like it’ gesture, the reinforced elements collide, forming a stable splint. This way, the effort needed to press in the plug is spread across the entire thumb, down to the carpus. In initial practical tests, the feedback of workers was very positive. It is currently being evaluated how the assembly aids can be applied as standard tools in further production areas.

BMW have produced these 3D printed thumbs, which are designed specifically for each worker, using a 3D scanner to scan their thumbs.

It certainly is a novel solution to a problem, and it is interesting to see the different ways 3D printing technology is used to solve various problems.