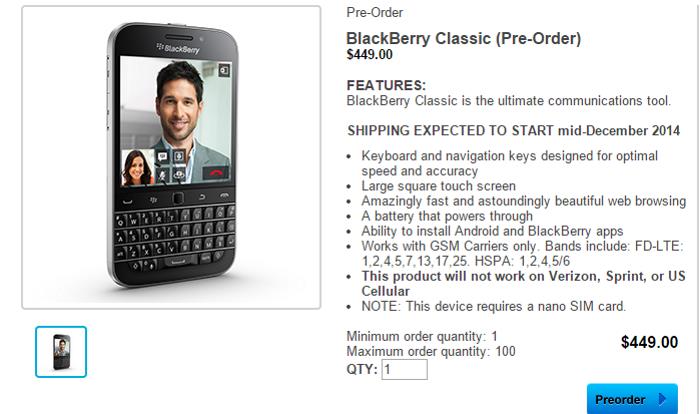 We’ve seen Blackberry Classic pose for the camera on several occasions in the past few weeks. The handset brings the classic Blackberry form factor with a QWERTY keyboard, under a decent sized screen.

It seems the wait may soon be over as Blackberry has started taking pre-orders of the Blackberry Classic. At first glimpse, it looks exactly the same as the handset we’ve seen in the leaked images.

The handset comes with a $449.99 price tag, unlocked, and will work with all GSM networks. Unfortunately, users on Verizon, Sprint or US Cellular will be unable to make use of the device since it doesn’t support CDMA networks.

As for the specifications, the product listing doesn’t reveal anything about the hardware, except that it will come with Blackberry OS 10.3.1. The Canadian company mentioned they are going to release more information December 17th. We’re not sure if it’s going to be a launch event or just the day when Blackberry will spill the beans about the Blackberry Classic.

As for shipping estimates, the online Blackberry store lists “mid-December” as the shipping date so we can except it get in the hands of the customers after December 17th, which could possibly be the arrival date for the handset.

Anyone interested in picking up a Blackberry Classic? Sound off in the comments below.