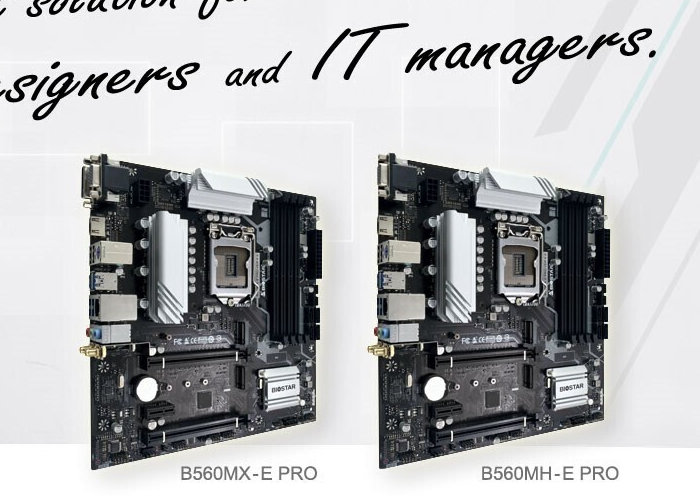 BIOSTAR has launched its new Intel’s 10th/11th Generation Intel supporting motherboards this week the form of the BIOSTAR B560MX-E PRO and B560MH-E PRO motherboards which will soon be available to purchase worldwide. Equipped with 6 x USB ports consisting of 4 x USB 3.2 (Gen1) Ports and 2 x USB 2.0 ports, together with other connections including single 1x PS/2 Keyboard / Mouse Port provides extra connectivity for users looking to use an older device with the system.

Powered by Intel’s B560 chipset, these two new motherboards are efficient and robust in any use case and inlcude PCI-e 4.0 and PCIe M.2 4.0 and M.2. The BIOSTAR B560MX-E PRO and B560MH-E PRO motherboards support up to 128 GB of DDR4 memory across 4 DIMM with an overclocking capability of up to 4000+(OC)MHz. Backed by BIOSTAR’s proprietary Digital PWM technology, the new B560MX-E PRO, and B560MH-E PRO motherboards are safe and long-lasting, capable of supporting the best hardware with ease. Both motherboards pack all the essentials in their rear I/O panel with almost identical layouts on a Micro-ATX form factor.

“Both motherboards share a single VGA-Out port in addition to an HDMI 2.1 port capable of supporting up to 4K vivid crystal-clear images. Three powerful audio ports controlled by the ALC897 chipset provide an immersive audio-visual experience. Additionally, 2x WiFi Antenna ports that support WiFi 6 and a single LAN port powered by Intel I219V chipset are readily available in these two motherboards for faster internet connectivity. When it comes to video connectivity, the B560MX-E PRO motherboard comes with a single DVI-D port which is not available on the B560MH-E PRO motherboard.”