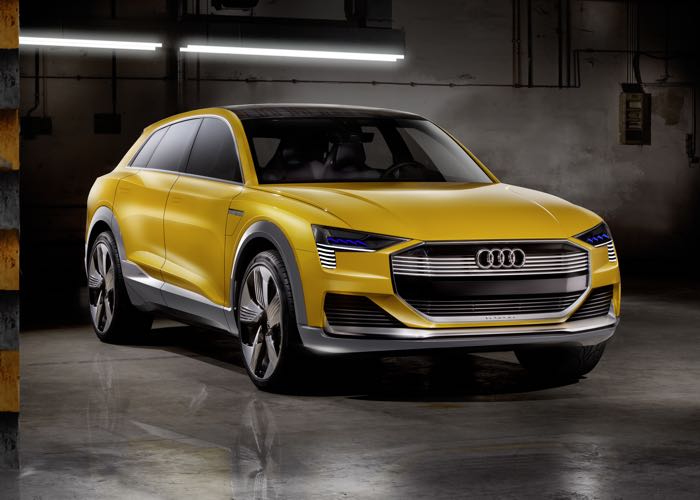 Audi has released some more details on their new Audi H-Tron Quattro Concept which is being shown off at the North American International Auto Show in Detroit.

The Audi H-Tron Quattro Concept is powered by an all electric drive system that uses hydrogen for power with a newly developed fuel cell.

High range, swift refueling, sporty road performance: The technology study Audi h-tron quattro concept demonstrates the huge potential of fuel cell technology. This model, which Audi is unveiling for the first time, has all-electric drive – using hydrogen as its energy source. It combines state-of-the-art fuel cell technology delivering up to 110 kW with a battery that provides a temporary boost of up to 100 kW.

Two electric motors on the front and rear axles represent a new evolutionary level of quattro drive – the electrified quattro. The electric motor on the front axle develops 90 kW, and its rear counterpart 140 kW. The sporty SUV accelerates from 0 to 100 km/h (0 to 62.1 mph) in under seven seconds. Its hydrogen tanks can be refueled safely and easily in around four minutes; a range of up to 600 kilometers (372.8 mi) is possible.

You can find out more details about the new Audi H-Tron Quattro Concept at the link below, Audi plans to use the technology it developed for the car for future vehicles.