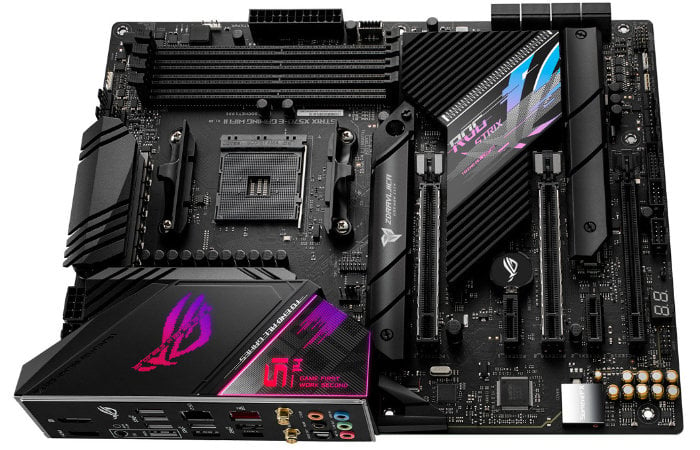 Asus has this week introduced three new motherboards based on AMD’s X570 chipset, which will join the new ROG Crosshair VIII Extreme as the latest offerings from ASUS on the X570 platform, in the form of the TUF Gaming X570-Pro WiFi II, ProArt X570-Creator WiFi and ROG Strix X570-E Gaming WiFi II. Unfortunately, no information on pricing or worldwide availability has been released as yet, but as soon as information comes to light, we will keep you updated as always.

“The ROG Strix X570-E Gaming WiFi II motherboard pairs the latest tech with essential ROG DNA : Elite gamers and enthusiasts who prefer the finer things in life will want to take a look at the new ROG Strix X570-E Gaming WiFi II. Building on the legacy of the ROG Strix X570-E Gaming WiFi before it, this fresh new board distills high-end components, smart software, and passive chipset cooling into one luxurious board. This revision of the X570-E makes a splash with revised ROG graphics running across the I/O shroud and the chipset heatsink. The CPU VRM also gets a boost to a 12+4-phase design, fueled by ProCool II auxiliary connectors. No matter your choice of Ryzen CPU, the new Strix-E will handle it with aplomb.

The ProArt X570-Creator WiFi motherboard is our first ProArt board to take advantage of the X570 chipset. If you’re not familiar, the goal of the ProArt series is to deliver maximum performance and stability for all sorts of users who depend on their PC or workstation to make a living: 3D artists, CAD and CAM designers, audio and video producers, and even software developers. Upgraded networking capabilities are a theme of our new X570 boards, and the TUF Gaming X570-Pro WiFi II is no exception. 2.5 Gigabit Ethernet comes standard, and a Wi-Fi 6E module handles both next-gen WiFi and Bluetooth 5.2. You can enhance your build’s aesthetics with the three RGB headers: one Gen 2 addressable, two standard. A quintet of fan headers and a dedicated AIO header let you build most any mainstream cooling setup with ease.

Our TUF Gaming hardware motherboard lineup follows three core tenets: a comprehensive selection of essential features, battle-tested reliability, and distinctive yet subtle styling. If you’re looking for a high-performance and long-lasting motherboard at a reasonable price, look no further.”