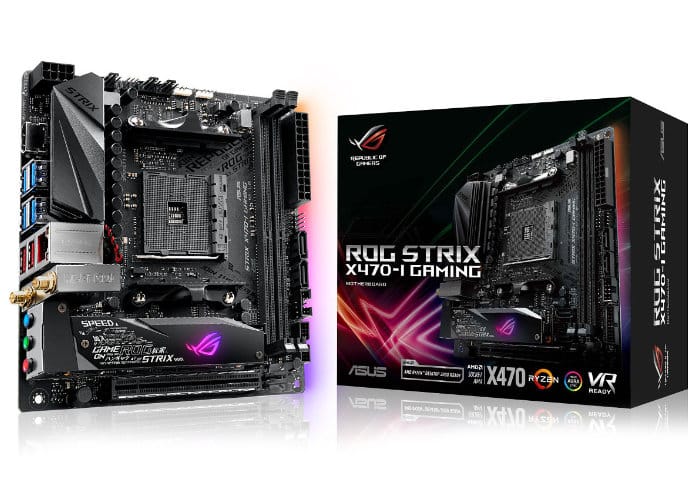 As well as unveiling their new Asus X407 and X507 compact and lightweight laptops this week, Asus has also unveiled their new range of AMD X470 motherboards. The second wave of motherboards designed for the new AMD Ryzen platform have been designed to provide the foundations of either “value-packed PCs to high-end gaming and content creation rigs” says Asus.

Comprising of six motherboards each design for its own specific purpose, the ROG Crosshair VII Hero and its WiFi twin lead the lineup with a stealthy design for serious overclockers, enthusiasts and gamers. Its Strix X470-F Gaming sibling makes ROG enhancements like easy tuning and next-level customisation more affordable, while the Strix X470-I Gaming provides a small form factor mini-ITX motherboard. “The X470 chipset is designed to enhance the performance of the next generation AMD Ryzen 2000 series of processors code named Pinnacle Ridge and yet retains backward compatibility with current Ryzen processors.”

The Ryzen processors reserve four PCI Express 3.0 lanes for an NVMe SSD, and the X470 chipset adds two more for an additional drive. “AMD’s Ryzen revival promises faster performance than the previous generation, and the abundance of models with unlocked multipliers gives users the freedom to push beyond stock speeds. Even with the luxury of unlocked multipliers, CPU overclocking is limited by cooling and the individual characteristics of each chip. With a single click, the 5-Way Optimization utility accounts for both by automatically tuning fans and testing the limits of the CPU. Its integrated intelligence finds the maximum speed the system can sustain without sacrificing stability.”

Unfortunately, no information on pricing or worldwide availability has been released as yet by Asus, but as soon as information comes to light, we will keep you updated as always. in the meantime for more details jump over to the Tech Power Up website by following the link below for the full press release.