Assassin’s Creed 4 fans will be pleased to learn a new multiplayer DLC has been made available today in the form of the Assassin’s Creed 4 Guild of Rogues, that brings with it two new maps to be played together with three new characters.

The Assassin’s Creed 4 Guild of Rogues characters include a Siren, Stowaway and Shaman and the new maps will also be available for all players to download for free on February 17th 2014. 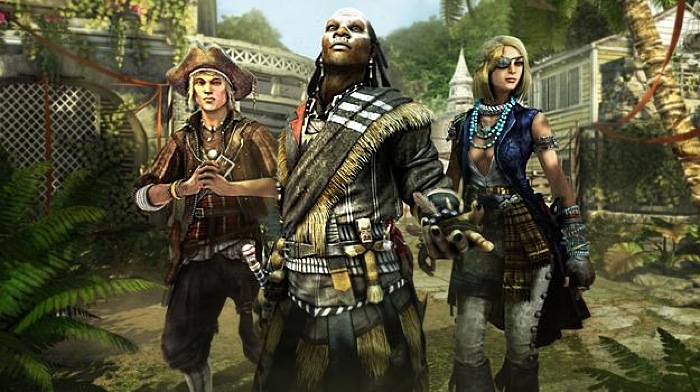 The Assassin’s Creed 4 Guild of Rogues DLC is the second DLC to be released for the game by Ubisoft and each new character brings their own unique set of skills, to battle for the title of deadliest assassin.

– The Siren: After years at sea posing as her deceased brother, The Siren is back on land, wielding a lethal navy saber acquired in battle. Ready to put her murderous skills to action, her striking appearance distracts unsuspecting foes, giving her time to make a clean kill. That mystique coupled with her deadly saber has earned her a name that even seasoned mariners fear to utter.

– The Stowaway: Seemingly foolhardy and carefree, the Stowaway is a seasoned fighter who has survived a lifetime of battles at sea. Even better on land than on sea, his agility and gun-wielding skills leave victims unaware of the danger he brings.

– The Shaman: Driven by forces beyond the mortal realm, he sees this world in a different light. Calm and composed, once he locks on a target he channels the forces of the supernatural to aid him in finishing off his prey with his brutal hatchet.

The new Assassin’s Creed 4 Guild of Rogues maps include Kingston and Charlestown.

– Kingston: Alongside Kingston resident’s sturdy, colonial houses, nimble assassins can navigate the tree-tops overlooking the young town, while the careful hunter will find shelter in the covered alleyways of the residential districts.

– Charlestown: The fan-favorite map from Assassin’s Creed III is back with a layout offering a mix of streets and open spaces, dominated by the town church.