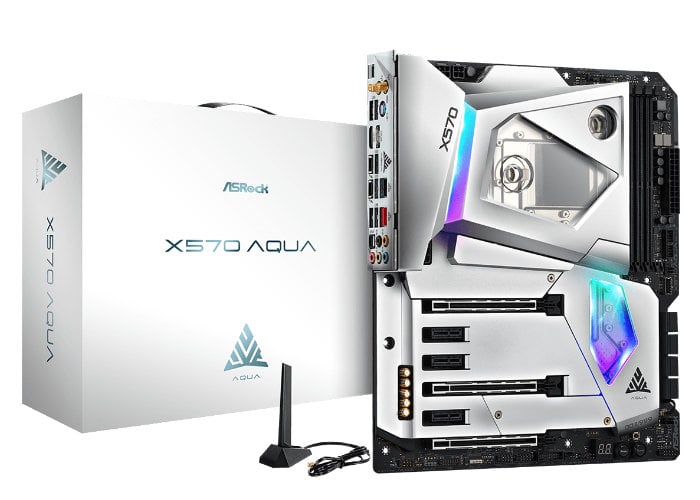 ASRock has this week announced it is creating just 999 units of its new X570 AQUA motherboard in a limited production run, and will be made available to consumers on a first come first served basis. The X570 AQUA motherboard has been created to provide the “ultimate selection” for the AMD X570 chipset and Ryzen 3000 series desktop processors, says ASRock. Chris Lee, General Manager of ASRock Motherboard BU, explains more :

“We’ve been excited to make this awesome motherboard for a long time especially to make it perfectly works with the world’s very first PCIe 4.0 ready AMD Ryzen 3000 series desktop processors and glad to finally let it be known to professional enthusiasts around the world.”

The X570 AQUA has been built on a server grade PCB to prevent board bending and adds low-loss technology to improve signal integrity as well as whole-system stability, offering a reliable and long-lasting PC platform without compromises. ASRock’s X570 AQUA comes with Intel’s new Wi-Fi 6 (802.11ax) wireless interface and the benefits of next generation PCI Express 4.0.

“We are thrilled to see partners like ASRock continue to take advantage of the X570 chipset and fully embrace its features,” said Chris Kilburn, corporate vice president and general manager, Client Channel, AMD. “3rd Gen AMD Ryzen processors offer gamers, enthusiasts and creators the most advanced desktop platform, and with ASRock’s AQUA integrating PCIe 4.0 standard and fully utilizing liquid cooling, we can’t wait to see the power and performance users will unlock with this board.”