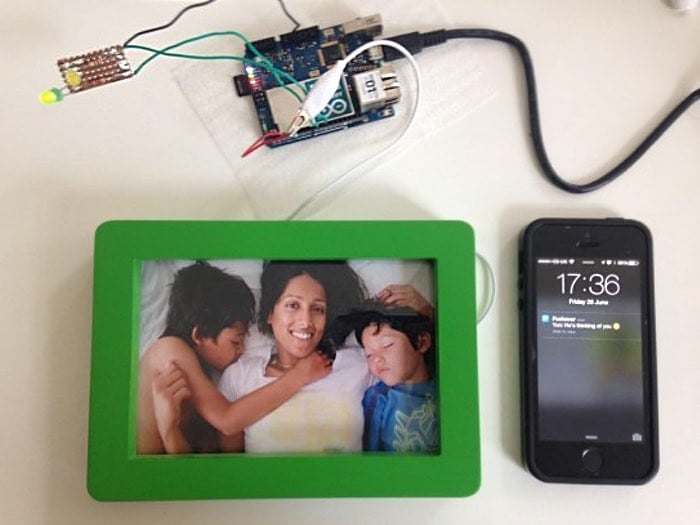 If you are looking for an Arduino project to keep you busy this weekend you may be interested in a new interactive picture frame that has been created by Martin Hollywood a creative technologist.

The inspiration behind the interactive picture frame was taken from wanting to be closer to his family and now when the picture is pressed the Arduino automatically sends a text message with an appropriate message.

Its creator explains a little more about the inspiration and functionality of his Arduino picture frame project.

Looking at the photograph of my family that I have on my desk one day, I missed them and wanted to be home. I touched the photo and realised that somewhere between those was the germ of the idea…

I wanted my family to know I was thinking of them, but I didn’t want to create two products; think GoodNight Lamp – I do love that project. In any case, there was no guarantee they would even notice a ‘blinking’ photo frame responding to my signal. Making the Receive a PUSH notification seemed like a no brainer, but the last time I developed for mobile was iOS 1! There are a number of service apps out there: Pusher, Pushingbox but I decided on Pushover. It had a 7 day trial period and good API support (I’ve since bought a license).

For more details on how to create your very own interactive Arduino picture frame that is capable of sending mobile text messages to your family and friends jump over to the creator’s blog via the link below. If you found this project interesting why not build your very own Arduino wind speed meter or anemometer to record the wind speed in your area.