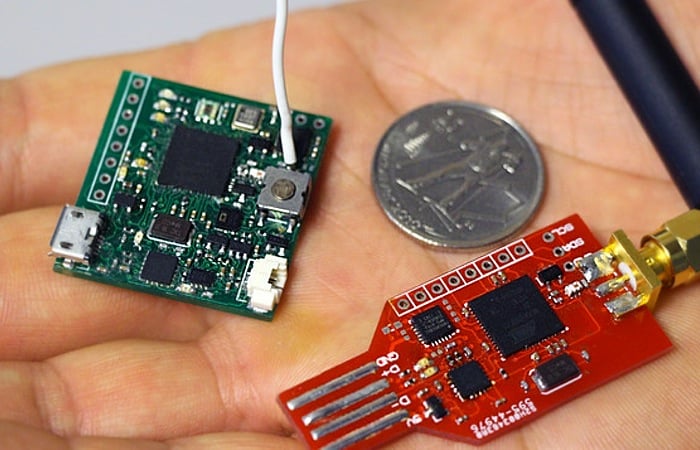 Makers and developers that have already used the original ArduIMU or who are looking for a fully capable Arduino based wireless Integrated Measurement Unit (IMU) packed full of useful sensors.

Are sure to be interested in a new Kickstarter campaign that has launched this week in the form of the ArduIMU V4 Arduino based sensor module offering wireless connectivity, 9 axis motion tracking sensor, environmental sensor, visible light and infrared sensor, humidity and temperature sensor and can be powered by a lithium battery.

The ArduIMU V4 is an Arduino based integrated measurement unit that offers a complete wireless sensor module that started as an open source project by 3DRobotics back in 2007. Watch the video below to learn more about the ArduIMU V4 project from Ahmad Byagowi
and see it in action. Its creators explain a little more :

“Our team squeezed a huge amount of functionality and sensors into a tiny form factor: π cm x π cm (a 3.14 cm x 3.14 cm square PCB). It can fit into a small plastic case as shown in the video. We also included wireless communication capabilities as well an SD card for data logging and storage.

The ArduIMU V4 is not just useful to applications which require inertial measurement, but has evolved into a powerful and versatile hardware framework for hobbyists, makers and hackers. After using it first-hand, we believe that the ArduIMU V4 is a must have for Arduino enthusiasts, developers, hackers and tinkerers.

ArduIMU V4 has a built in Micro-USB port for charging and communication with a host computer. Since we used a standard FTDI USB-Serial chip, you don’t have to worry about finding finicky drivers to make it work. To communicate wirelessly, you simply use two ArduIMU V4 units and set up wireless communication between them.

Of course, the ArduIMU V4 can do both at the same time, so you could have one ArduIMU V4 out sampling data and sending it wirelessly to a second ArduIMU V4 that is plugged into your computer’s USB port to do some heavy number-crunching.”

The ArduIMU V4 project is currently over on the Kickstarter crowd funding website looking to raise $35,000 in pledges to make the jump from concept to production. So if you think ArduIMU V4 is something your projects could benefit from, visit the Kickstarter website now to make a pledge and help ArduIMU V4 become a reality.