For years, people have been coming up with bright and creative ideas in the shower. Unfortunately, most people forget what the idea was hours after the shower is over. 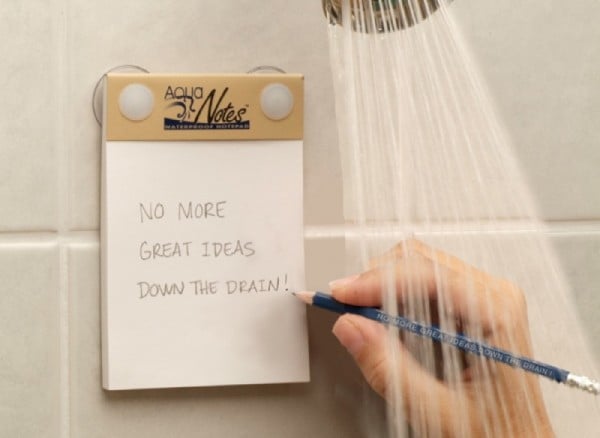 There is scientific speculation about why the best ideas often happen in the shower. Some believe that the ions contained in water stimulate brain activity, which is why people are so creative during bath time. Another idea is that showers put people in a relaxed state. As the stress melts away, the ideas rapidly come.

Aqua Notes provides a way for individuals to keep track of their bright ideas in the shower. Aqua Notes is a simple notepad that is completely waterproof. Water will bead up and roll off the waterproof paper and the notepad is durable enough for someone to write on underwater. The pen is also water resistant and made from 100% natural cedar.

The Aqua Notes consist of a 3 by 5 inch pad and 40 sheets of paper that are perforated so that the notes can easily be removed. Users can simply attach the Aqua Notes to their shower wall with the two suction cups found on the back of the notepad. The notepad comes with a suction cup pencil holder as well.

Aqua Notes is also very eco-friendly. The notepads are printed with soy-based ink and are also recyclable.