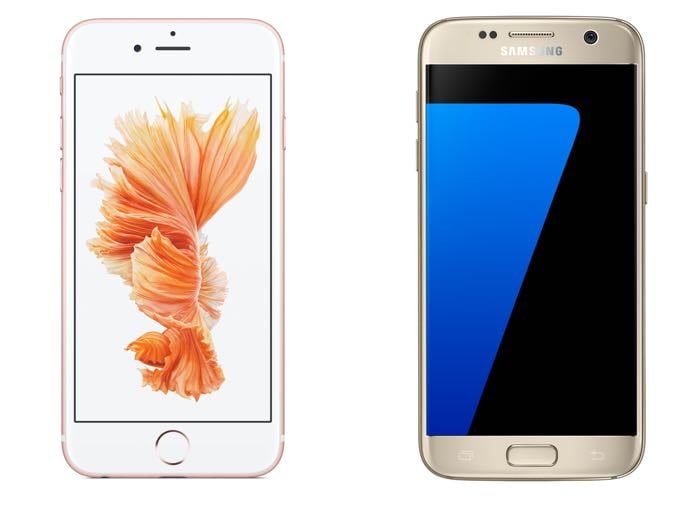 Whilst Apple’s iPhone 6S is last years model, the Samsung Galaxy S7 is the company’s new flagship for 2016, it comes with the latest hardware and features, Apple is expected to release a new iPhone 7 later this year.

You can see the key differences between the two smartphones in the table below for quick reference, there is also more in depth information on the two handsets after the table.

The new Samsung Galaxy S7 is equipped with a 5.1 inch Super AMOLED display that has a Quad HD resolution of 2560 x 1440 pixels, there are also a total of 557 pixels per inch which is almost double that of the iPhone 6S. Samsung’s new Galaxy S7 also comes with an Always On display which provides information when the handset is in standby mode.

The iPhone 6S comes with a 4.7 inch Retina display that has a resolution of 1334 x 750 pixels and 326 pixels per inch. Apple’s iPhone 6S display also comes with Apple’s 3D Touch feature that brings new navigation features to apps on the device. The iPhone 6S display resolution is behind the majority of the smartphones on the market at the moment, we are expecting the display to get a major upgrade with the release of this years iPhone 7 and 7 Plus handsets.

The iPhone 6S is powered by Apple’s A9 processor and it also features their M9 motion coprocessor, the handset comes with 2GB of RAM a a choice of storage options which include 16GB, 64GB and 128GB, this is non expandable storage, the handset does not feature a microSD card slot.

Samsung’s Galaxy S7 comes with two different processor options depending on the region, you either get the new Qualcomm Snapdragon 820 processor or Samsung’s own new flagship processor, the Exynos 8990.

For storage there are two choices on the Galaxy S7, you can choose between 32GB and 64GB of built in storage, there is also a microSD for extra storage, this is something that Samsung did not include in last years handset, which did not please Samsung fans, the expandable storage on the new S7 is a welcomed feature by many Samsung fans.

Apple’s iPhone 6S is equipped with a 5 megapixel front facing FaceTime HD camera for Selfies and video calls, on the back of the handset there is a 12 megapixel camera which can record 4K video in 2160p @30fps, it can also record 1080p video @ 60fps, plus 1080 slow motion video at @120fps and 720p video at 240fps, the rear camera comes with Optical Image Stabilization.

The Samsung Galaxy S7 also comes with a 5 megapixel front camera and a new 12 megapixel rear camera, it actually has less megapixels that the camera on its predecessor, the Galaxy S6, although is is designed to produce improved photos and videos over the Galaxy S6.

The S7 can record 4K video in 2160p @30 fps, 1080p video @60fps and 720p slow motion video @120fps, it also comes with Optical Image Stabilization. Both handset comes with a Live Photos feature which records a small video when you take a photo, Apple’s is called Live Photos and Samsung’s is called Motion Photo.

Samsung’s Galaxy S7 comes with a casing that is made from a combination of glass and aluminum and the handset is available in four different colors, Gold Platinum, Silver Titanium, White Pearl and Black Onyx.

The casing on the iPhone 6s is made from aluminum and the handset is also available in four colors, Rose Gold, Space Cray, Silver and Gold. Both the Samsung handset and Apple’s handset come with 802.11 a/b/g/n/ac WiFi and the iPhone has a 1715 mAh battery whilst Samsung’s device features a larger 3000 mAh battery.

There are many things you need to take into account when comparing the two devices, on paper the Samsung Galaxy S7 is the clear winner, it comes with a higher resolution display, expandable storage and a larger battery, more RAM and possibly a better camera.

The cameras on the two smartphones share similar specifications and both handset also come with similar features like Apple Pay on the iPhone 6S an Samsung Pay on the Galaxy S7.

Both handsets also have a similar entry price point, costing between $650 and $670 for the entry level models.

Samsung’s handset does come with Samsung’s own TouchWiz UI which may not appeal to everyone as much as an iOS UI will. The Samsung Galaxy S7 appears to be the better device in terms of hardware over the iPhone 6S.

Apple’s iPhone 6S is over six months old, where as Samsung has just launched their Galaxy S7, this means that the device has the latest hardware. It will be interesting to see what changes Apple makes to their iPhone when their new iPhone 7 and 7 Plus handsets are launched later this year.

You can find out more details about Samsung’s Galaxy S7 and Apple’s iPhone 6S smartphones at the links below.